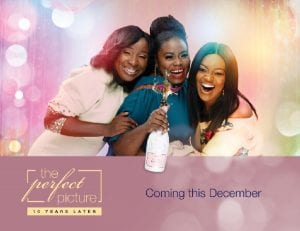 Sparrow Productions (currently Sparrow Pictures) is all set to bring the fun-filled sequel of the award-winning film titled ‘The Perfect Picture’ with the renewed title of ‘The Perfect Picture 10 Years Later’. The film was first released ten years ago and it is still considered as one of the best rom-coms that the Ghanaian film industry has produced till date.

‘The Perfect Picture’ is about three amazing women who are pushing their thirties by accepting challenges, taking risks and breaking age stereotypes perfectly. However, the latest sequel is all about how they are doing absolutely marvelous in their forties as well. The lead actresses are Jackie Appiah, Lydia Forson, and Naa Ashorkor Mensah-Doku.

‘The Perfect Picture 10 Years Later’ is amazingly written and directed by Shirley Frimpong-Manso, however, the production credits go to powerhouse duo. The highly anticipated sequel is all set to release in December for the audience to have a perfect rom-com filled Christmas.

Get Directions
Previous
Next
Change Location
To find awesome listings near you!