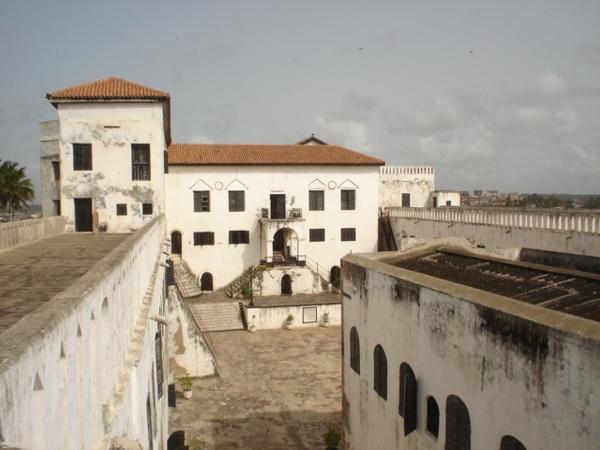 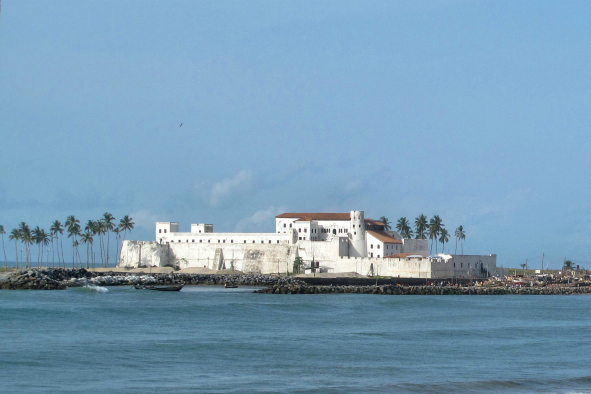 St George’s Castle, a Unesco heritage site, was built as a trading post by the Portuguese in 1482, and captured by the Dutch in 1637. It was expanded when slaves replaced gold as the major object of commerce, with storerooms converted into dungeons. The informative tour (included in the entry fee) takes you to the grim dungeons, punishment cells, Door of No Return and the turret room where the British imprisoned the Ashanti king, Prempeh I, for four years.

Elmina Castle was the first trading post built on the Gulf of Guinea, so is the oldest European building in existence in suib-Saharan Africa. Elmina is also a picturesque fishing town along Ghana’s coast, not far from Cape Coast. It is home to one of Ghana’s biggest attractions, St George’s Castle. Built by the Portuguese in 1482, it was captured by the Dutch 150 years later and became the headquarters of their West Indies Company for the following 250 years.

Gold exports were soon replaced by slaves and the tours through the dungeons will give you a good idea of how gruesome a trade it was. The Castle houses a small museum and guided tours are available. The stark beauty of the white-washed Castle walls contrast deeply with the dark history of this place.

Fort St Jago lies across the lagoon from the castle, and is worth visiting for the views it offers of the town and Castle.

Renowned as the first major European construction in tropical Africa, St. George’s Castle, in the town of Elmina in the Central Region of Ghana, was founded by the Portuguese in 1482. The site of the Castle was selected by Portuguese navigators, as it was advantageously located at the end of a narrow promontory, a stone’s throw away from both the Atlantic Ocean and the Benya River. The lee of the low headland provided an excellent natural harbour.

St George’s Castle or ‘Sao Jorge da Mina’, after the patron-saint of Portugal, as the castle was known to the Portuguese, afforded the Portuguese a trade monopoly in the area, with unrivalled access to the region’s gold.

The sheer magnitude of trade volumes resulted in labour challenges, as navies were unable to convey the large quantities of European goods to all markets. The importation of slaves from Benin in exchange for gold and ivory in the early 16th century was the identified solution. However, not long after, the influx of superior gold from Mexico into Europe caused gold prices to plummet rapidly. The economically distraught Portuguese were easily ousted from Elmina in 1637 by the Dutch.

The main Dutch trades were gold and slaves; they reconstructed the castle between 1770 and 1775. Until 1872, the castle served as the focal coordinating point for Dutch Gold Coast activities. In 1682, the author Jean Barbot described St. George’s Castle as having ‘no equal on all the coast of Guinea, with respect to beauty and strength.

On 6th April, 1872, the castle was ceded to the British. In recent years, it has served as Police Recruit Training Centre, a secondary school, and it is presently a historical museum.  St. George’s Castle is featured on the UNESCO World Heritage List.

Next to the castle is a picturesque fishing harbour, and within walking distance are sites such as Fort Coenraadsburg (St. Jago), the Dutch cemetery, and the ‘Posuban’ buildings of Elmina.

Enslaved people imported to those regions that are part of present-day USA
(Date and “official” Numbers). Not counted the many, many people, who died before!

Visitors may absorb the sights of the former storehouses and slave dungeons, chapels and governor’s chamber. Another scene of interest is the cell where a King of Asante was once held prisoner.

Visitors will also be afforded the opportunity to capture some bird’s eye photographs of the surrounding harbours, fishing boats, and the nearby Fort St Jago, all from the battlements of the four-storey St. George’s Castle.

After a tour of the castle, a chance to rejuvenate is on hand at the museum’s restaurant and bar. A bookstore and a gift shop are also available, and the museum provides visitors with access to a car park.  There is an open courtyard for outdoor activities.

Entrance fees are as follows: