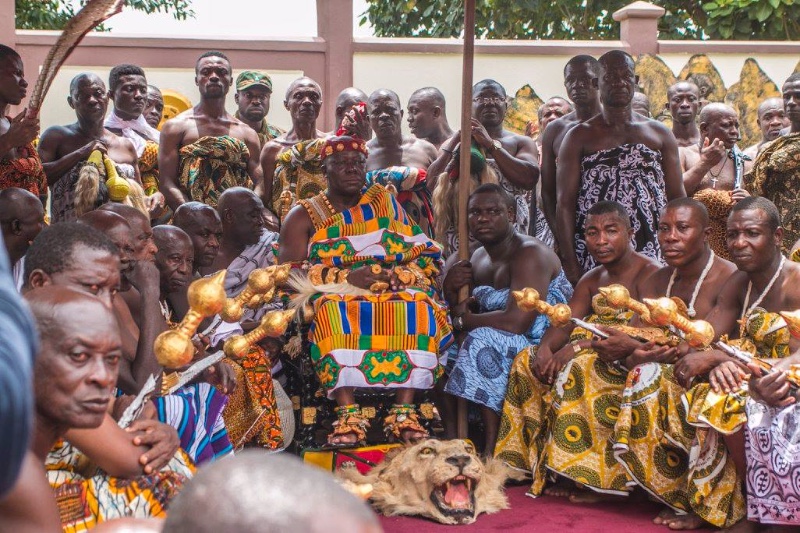 Kingdom of gold is rich in history and culture.

The Ashanti Region, in south Ghana, is the ‘Kingdom of gold’, with a legacy of fine craftsmanship and culture traditions.

Occupying a central portion of modern Ghana, Ashanti is the hub of the ancient territory of the Asante and still the heartland for all Asante people, wherever they may be now.

A visit to Ashanti must include Kumasi, the ancient capital of the region and Ghana’s second city, founded in 1695 by the Asantehene (Osei Tutu). The scenic and hilly capital is home to the palace, museums, forts, harbours and churches that provide a historical backdrop for the festivals and ceremonies that are still held with great enthusiasm today. Visitors to Kumasi have an opportunity to see the area’s cultural treasures. Tourist hotspots in the city include the Kumasi Fort; the Military Museum; the beautiful 300 years old shrine at Besease; and the Manhyia Palace, where the Asante King sits in session every sixth Sunday heralded by a procession of dignitaries, with exuberant drumming and horn blowing.

Famous for gold, cocoa and cloth production, the Ashanti Region also has the largest open-air market in West Africa, at Kejetia. Tourists soon realise that haggling is an accepted part of trading in Ghana.

Kumasi is ringed with villages famous for their artisans and handicrafts, including woodcarving and kente cloth. The traditional kente cloth is woven by men of the Ashanti tribes. The Ashanti are known for their dazzling and bright patterns, geometric shapes and bold designs interwoven in silk and cotton. Referred to by the Akans as ‘nwentoma’ (meaning ‘woven cloth’), the kente cloth originated in the Ashanti Kingdom and is still one of the region’s greatest exports.

Local people choose the sacred cloth for their names as much as their colours and patterns. A visit to the royal kente weaving village of Bonwire is recommended.

The Ashanti Region, known as ‘ the land of the golden stool’, is also home to the most important gold mines in Ghana. Visits can be arranged to the town of Obuasi, 50 km south-west of Kumasi, which still has an air of the 1890s gold rush.

The Ashanti Region is in a vast tropical rainforest belt dominated by impressive forest, large cocoa farms and picturesque settlements. Although is the largest and urbanised region, Ashanti is also one of the most beautiful regions in Ghana and a great area to explore the unspoilt natural environment. For birdwatchers and butterfly enthusiasts, both the Owabi Wildlife sanctuary and the created lake Bosometwi are well worth a visit. Walkers will love the Bobiri Forest Reserve and its arboretum, the Bomfobiri Wildlife Sanctuary with its seasonal waterfall and hills around Lake Bosomtwi. Forest wildlife, including monkeys, buck and clouds of butterflies, can be seen all over the region.

The Ashanti Region is the cultural heartbeat of the country with numerous festivals.  Among the best known are the Akwasidae, Papa, Kente, Nkyidwo and Adae Kese festivals. These religious events commemorate past leaders and heroes of the Akan. Although they are dead, their spirits are believed to be alive and to take an interest in the affairs of the living, watching their actions and consulting with them. The Akwasidae festival attracts people from all walks of life, especially those in the diaspora, fetching income to those in traditional wares such as kente cloth and woodcarvings.

Visitors can also participate in other traditional events such as funerals and naming ceremonies. Funerals, usually held on Saturdays, are spectacular events in Ashanti with displays of drumming, dancing and pageantry, often with thousands of mourners in traditional red and black. Meanwhile, child-naming ceremonies are occasions for (amicably) settling individual and family squabbles.

Throughout the Ashanti Region, and especially in Kumasi, guests will find welcoming hotels and restaurants and first-rate entertainment. Sporting facilities are available in the urban areas, while fishing can be enjoyed on the lakes and rivers.

The name Ghana means ‘warrior king’ and harks back to the days of the Ghanaian empire between the ninth and 13thcenturies.