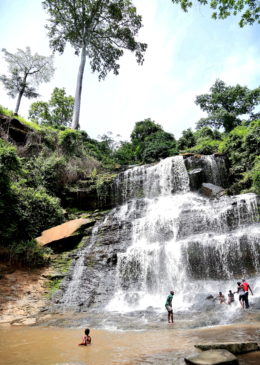 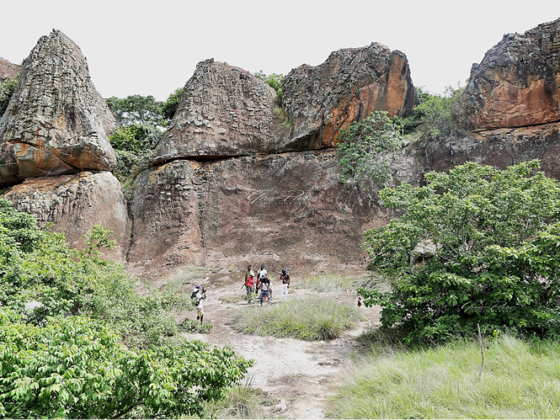 Often recognised as Ghana’s breadbasket and less know to tourists, Brong Ahafo is the country’s greatest agricultural region with a large acreage of food crops and cocoa plantations as well as an extensive forest reserve and wildlife attractions.

The Brong Ahafo Region was created in 1958 and named after the dominant native inhabitants, Akans Brong and Ahafo. Largely unspoilt by industrial development, the area is one of the most attractive in Ghana, with many beautiful tourist sites.

Its rivers feature in some of the most spectacular of these visitor hotspots. The Pumpum River falls 70 meters among rocky steps to form the beautiful Kintampo falls, hidden in woods close to the Kumasi to Kintampo highway.

The Monkey Sanctuary at Fiema, 22 km north of Nkoranza, makes for a great day out. The black silky colobus and brown mona monkeys are an enchanting sight.

There are held sacred by the people of Boabeng and Fiema and to kill a monkey is a taboo. The monkeys have access to all parts of the village and local people plant fruit trees for them. When a monkey dies, it is buried in a coffin and special funeral rites are performed.

The Akans people in this region are mainly farmers, raising cash crops such as cocoa, cassava, yams and maize in addition to a variety of fruits. The rainy season lasts nine months and the soil is rich and productive.

Visitors are made welcome to the many agricultural fairs and local festivals in Brong Ahafo. Busy markets in the small towns and villages display farm produce as well as pottery, weaving and other crafts. The ancient village of Nstua, 20 km from Techiman, is famous for Kyenkyen cloth, made from the bark of a tree. It is fascinating to watch the making of this coarse fabric that was worn in ancient times.

Festivals are a huge part of Ghanaian society and Brong Ahafo is no different. The week-long Apoo festival is held in Techiman and Wenchi in November. It is a big time for family reunions and unity among the people.

The people of Dormaa Ahenkro, Berekum and Nsuatre put on the Kwafie Festival between November and December- a time when the descendants of original Dormaas come home to a grand reunion. Highlights include a large bonfire (symbolic of the Dormaas first bringing fire to Ghana) and a display of paraphernalia.

No visit to the Brong Ahafo Region is complete without a trip to the main towns of Sunyani and Techiman. The regional capital, Sunyani, only 90 minutes by road from Kumasi, is a well-planned city with an idyllic environment- a pleasant change from the bustle of Accra and Kumasi.

Techiman, 60km north-east of Sunyani, is believed to be the birthplace of the Akan people. Prehistoric relics, found in the area, are now preserved in the chief’s palace. The town comes alive on market days as local people arrive to sell their wares. In the Tano River, which flows through Techiman, visitors may catch a glimpse of the sacred fish, said to have golden crowns. The nearby Catholic monastery of Tuobodom may be visited by appointment.

With a multiplicity of ethnic groups, cultural practices and tourist attractions, the Brong Ahafo Region is ready to welcome you.

In 2019 the Brong Ahafo Region was broken into 3 separate regions resulting from a referendum. The new region are: