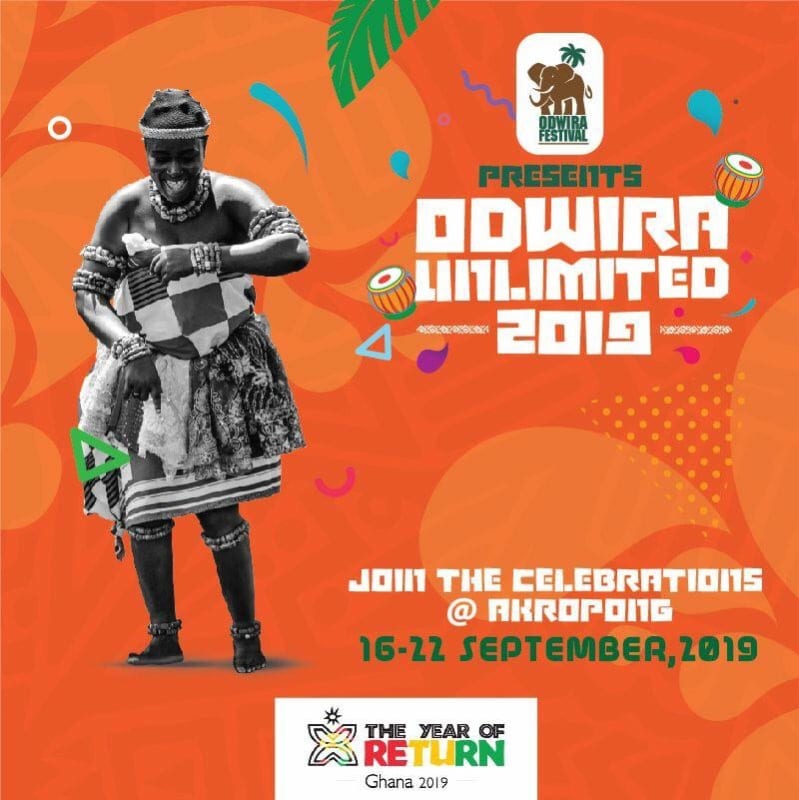 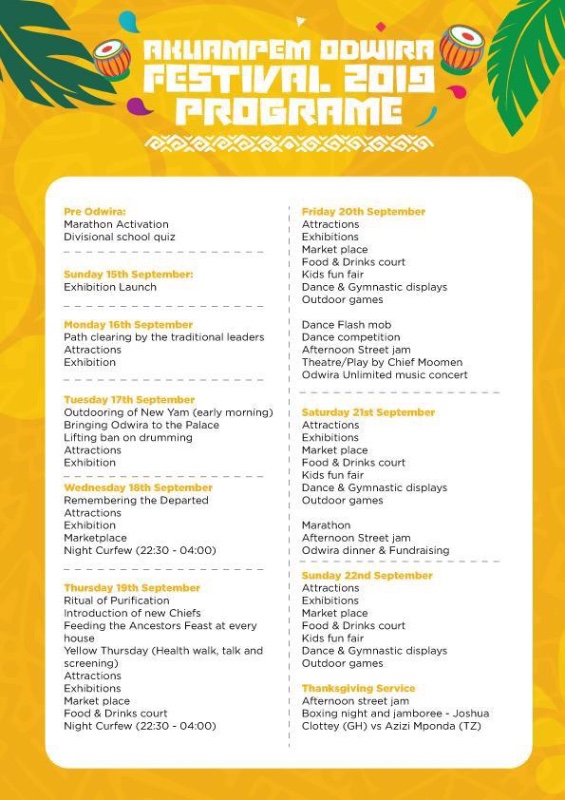 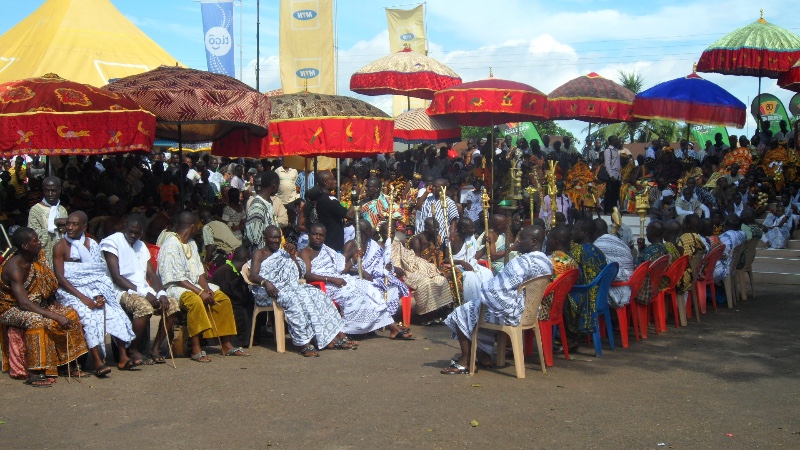 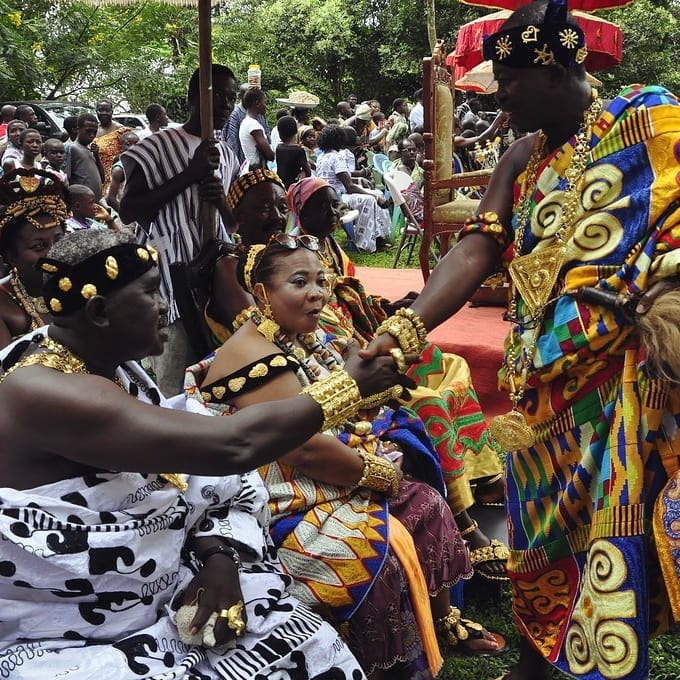 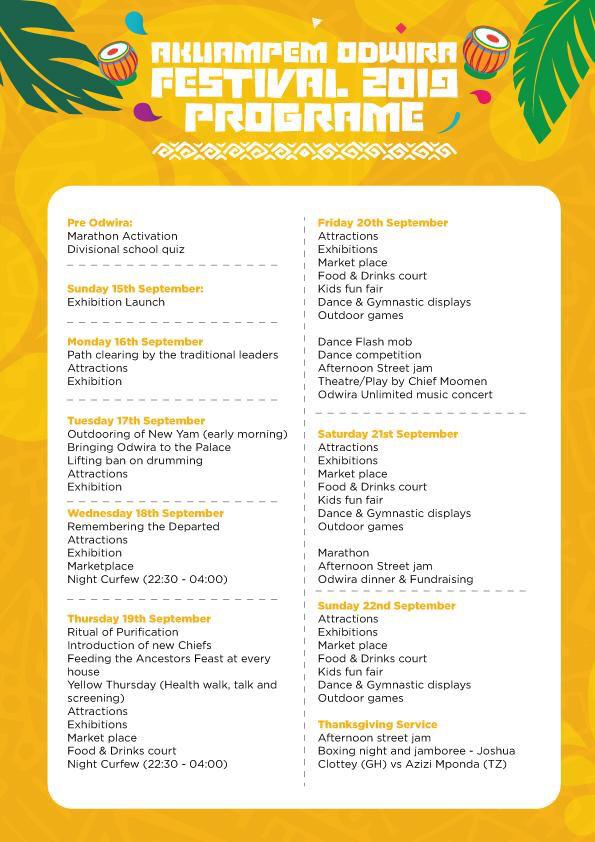 The Akuapem Odwira festival was initiated by the 19th Okuapimhene of Akropong, Nana Addo Dankwa I (1811-1835) and was first celebrated in October 1826. It’s significance is to celebrate their victory over the invincible Ashanti army during the historic battle of Katamansu near Dodowa in 1826 and also to cleanse themselves and ask for protection from their gods.

Odwira is a time of spiritual cleansing, when the peoples Okuapeman, and all who celebrate, present themselves anew and pray for protection. Traditionally, the timing of the festival also coincides with the harvest season when there is abundant food; during which time the people give thanks to the Ancestors. Being a Yam Festival, gratitude for the harvest is especially expressed in the “feeding the ancestors”.

During the Festival, bowls of mashed yam (some mixed with palm oil and others left white) which have been specially prepared by the Okuapehene and other stool occupants are carried in procession from the Ahemfi to feed the ancestors at Nsorem. A little-known fact is, the Odwira Festival is also celebrated by the Ga peoples of Jamestown in the Greater Accra Region of Ghana as a result of their long association with the Akans through intermarriages.

Odwira Festival is a week long series of traditions and rituals performed to purify the town, the people and most importantly, the ancestral Stools of the Chiefs. It is also a festival to celebrate the harvest of “new Yams”.

Six weeks prior to the occasion, some activities are forbidden and hefty fines or serious punishment are given to people who violate this ban. Some of these activities include, no loud music, no drumming, no whistling after dark and most of all NO EATING OF YAMS.

Odwira Festival is broken into six days and each day has a significance and a purpose. This starts from Monday and ends on Sunday. Below is a break down of what actually happens on each day;

Monday
Men from the three royal families in the town go and clear the path to their ancestral burial grounds. This is the sacred cemetery or “Ammamprobi”. This is done to let them know they are invited to join in the festival.

Tuesday
In the morning, the men from the royal family return to the sacred cemetery to get the ancestors‘ permission to perform the festival. As they return, guarded by the “Executioners” or Abrafo (sing Obrafo) chanting and firing guns, the entire village gather along the streets and cheer these men. A message is given to the chief that the festival can proceed.

The ban of all the activities mentioned above are lifted. Yams can now be enjoyed. This day is the Splitting of the New Yam and there’s a lot of merry making.

But before the yam ban is lifted and the new yam is introduced to the people, people gather in front of the palace cheering and clapping whiles the strongest men in the town “battle” against each other to grab one of the new yams and take it to his house to cook.

One yam is introduced at a time until all six of them have been exhausted.This yam game shows who the strongest man is in the village and its also fascinating, exciting and incredible.

Wednesday
This is the day reserved to Mourn the ancestors and all loved ones who passed away. This is also the day for all those who died during the six week ban are buried. This is a sad day and usually people wear red or black or both. This is the usual attire Ghanaians wear when there’s a funeral.
They fast throughout the day to remember dead relatives. Basically, they wail, drink and drum.

Thursday
This day on the Odwira calender is for Feasting. People exchange foods and other gifts. Some people also pay homage to the chief and queen mother and give them presents of all kinds.

The royal families prepare mashed yams with eggs to be sent to a shrine for the ancestors to eat. This food is carried on the head by women guided by men through the principal streets to the shrine. These women look drunk and tired, walk in an uncontrolled manner, stager sometimes, run occasionally and stop abruptly. Some believe that these women are “possessed” by the ancestors as they parade down the street.

There’s other forms of activities like eating and cooking competitions.

Friday
This is the day of Celebration. The climax or the peak of the Odwira Festival. The Grand Durbar is held on this day and not only the inhabitants participate, but many dignitaries, chiefs and queen mothers from all over Ghana and in fact, anybody interested come to celebrate with the principal chief and queen mother of Akropong.

On this day, the Okuapimhene and Queen mother wear their full traditional regalia and display a lot of gold on their heads, necks, wrists, fingers and ankles. This is a very colourful event.

They are carried by their attendants above everybody in a palanquin (a boat-like chair) and they dance bouncing in the air, whilst there’s drumming and singing going on, on the packed street. There’s also  lot of gun firing by the scary looking Abrafo. After a couple of hours being “airbourne”, the chief is sent to a gathering square or the durbar grounds to be seated. More drumming, dancing and rituals are performed.

The chief and queen mother receive homage from all the sub chiefs and queen mothers and other dignitaries. The paramount chief gives his speech after which the celebration continues into the night.

Saturday and Sunday
These two days don’t really have any thing special going on. There are a few gigs here and there but nothing official. These include soccer matches, scrabble competitions, etc..

The ‘Krontihene’ of Akuapem holds a special durbar on Sunday as part of the Odwira Festival.