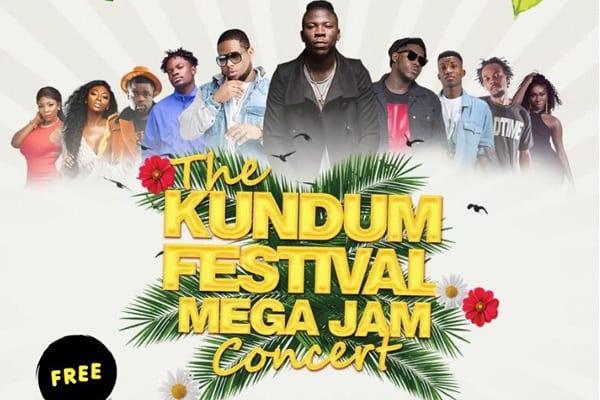 The Kundum festival is celebrated by the Ahanta and Nzema people of the Western Region of Ghana. It is celebrated to thank God for the abundance of food at the times of the harvest period.

It is believed that Kundum originated from Ahanta Aboade, a village on the Tarkwa-Takoradi road. Oral tradition states that a hunter from Aboade saw dwarfs dancing to the rhythm of strange music while on a hunting expedition. The hunter watched these strange creatures perform their strange dance for one month and later brought the dance home. Another legend also says that there existed in the village of Aboade a palm tree which is associated with the origin of the Kundum festival. The fruits of this tree used to ripen once a year, and with time, this period became a symbolic calendar in the lives of the people. The ripening of the palm fruit became the signal for the festival to begin.

Kundum was later adopted by the Nzemas. It is therefore not only the Ahantas who celebrate Kundum, but also the Nzemas. The Secondi people also adopted Kundum when they settled at secondi. Although there are similarities in the way Kundum is celebrated among the people, there are some unique features in the way it is celebrated in every district. Through these festivals, the people remember their ancestors and ask for their help and protection. The festivals are also used to purify the whole state.

The Secondi Kundum festival may be regarded as a harvest festival, as well as a period for remembering the dead, cleansing the community and setting new goals for the coming year.

It is interesting to note how foreign contact and modern economic development have reshaped the manner of celebrating the festival as the years go by. When the paramount chief sits in state to receive homage from his subjects, development projects are planned and means for raising funds are considered.

The unique feature of this festival is that it moves from town to town. If u miss it this week, you get another opportunity to see it at another place.