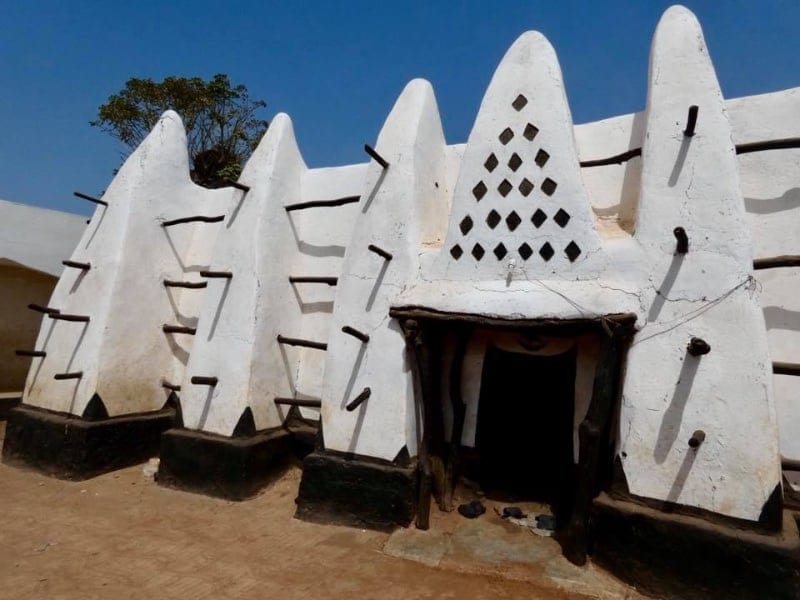 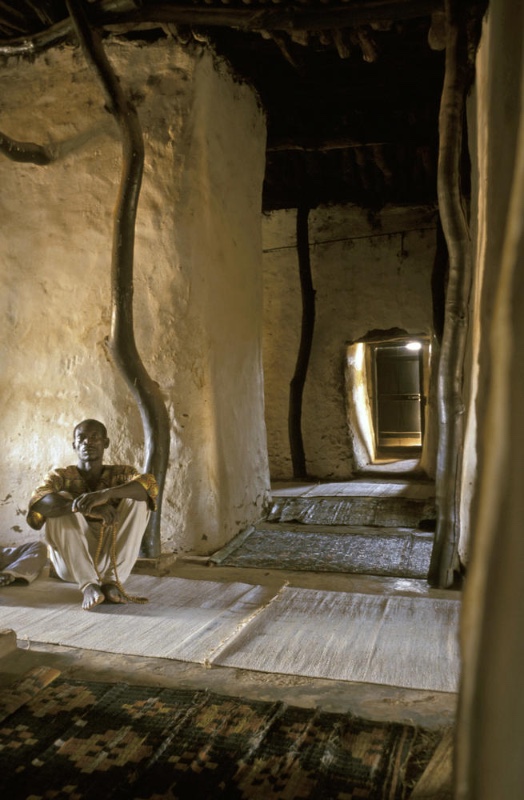 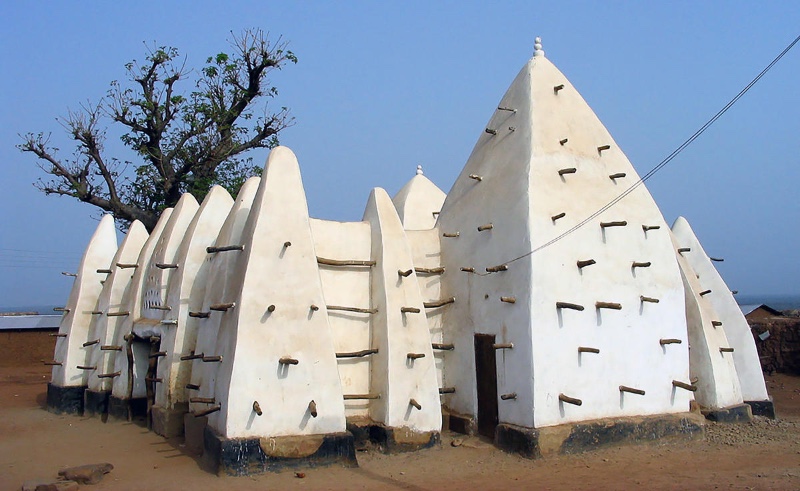 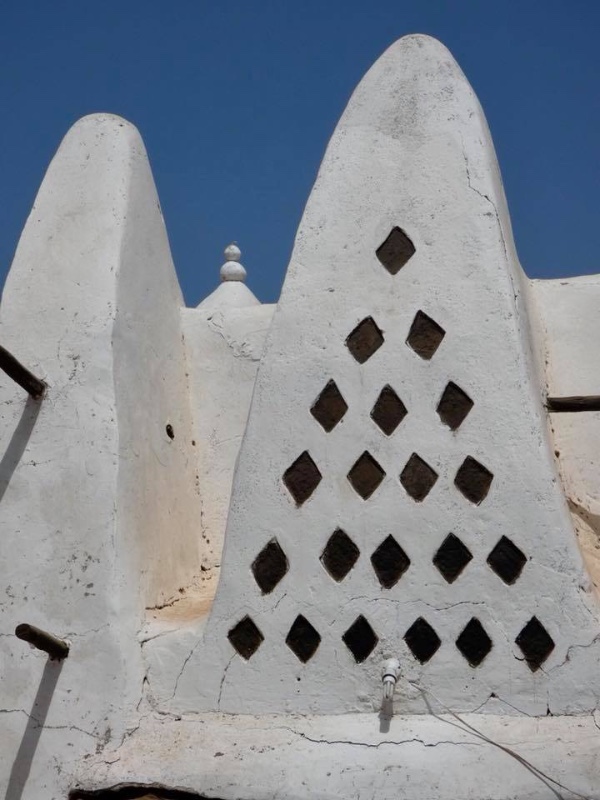 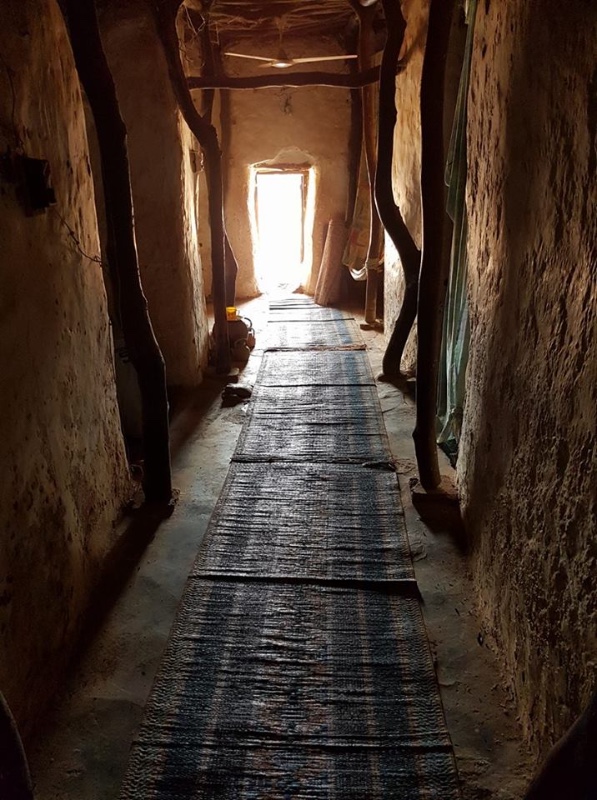 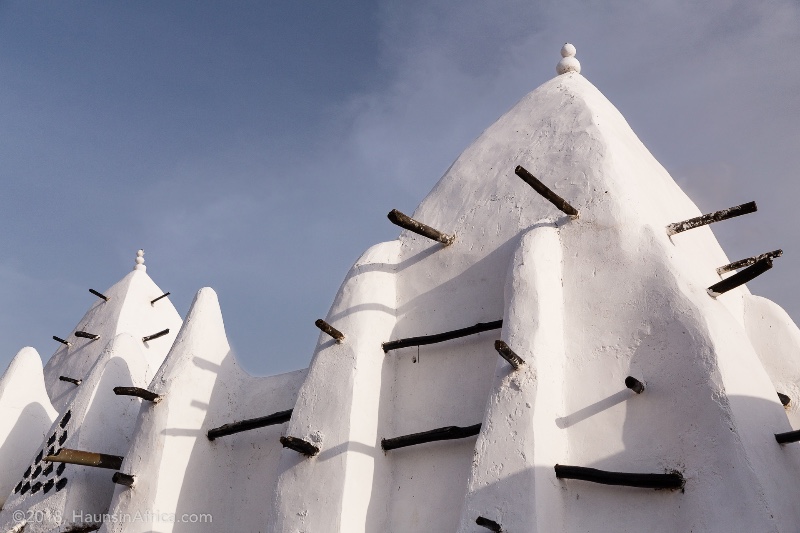 The Larabanga Mosque is thought to be the oldest mosque in Ghana and West Africa. It is popularly referred to as the ‘Mecca of West Africa’, because of its rich historical and architectural values. The dimensions of the mosque are approximately 8m by 8m. The Larabanga Mosque made it to the  World Monuments Fund’s List of 100 Most Endangered Sites.

There is some controversy over when exactly the mosque was built, and who built it. The mosque is thought to date back to 1421. It is believed that an Islamic trader called Ayuba, who was travelling through the area, built the mosque. According to one story, Ayuba slept in the area and had a dream in which he was instructed to build a mosque. When he woke up the next morning, the foundation of the mosque had mysteriously appeared, so he continued with the construction until the mosque was complete.

The mosque is made of mud and stick, in Sudanese style. Right next to the entrance is a large baobab tree, under which Ayuba’s remains are buried. The mosque has four entrances: one each for the village chief, men, women, and the muezzin who leads the call to prayer. The mosque houses a very old Koran which is thought to have been delivered from heaven to an Imam called Bramah, around 1650, after he had prayed hard for a Koran.

The mosque is located in a small predominantly Muslim town, called Larabanga, near Damongo in the Western Gonja District in the Northern Region.  Non-Muslims are not allowed to enter the mosque.

Apart from their usual role as Friday prayer grounds, the ancient mosques also serve as places of pilgrimage to the Muslim communities in the country. On eventful days, a lot of faithful worshippers gather at these mosques for prayers and listen to Koranic readings.

Private readings are also organized on request for individuals who have serious problems to solve, or who seek spiritual protection on their ventures. In return for the readings, the Chief Imam normally requests the sacrifice of a cow and other donations for the community.

Most of the communities of the regions of Northern Ghana, especially the Northern Region, are Muslim. Islam, which first entered Africa through Egypt in the 10th Century AD, progressed from Egypt towards the west and the south at the same time as the trans-Saharan slave and gold trade routes.

In Ghana, these trade routes were used by Mande warriors, Islamic Traders and Missionaries. Occasionally, these routes were marked by incursions by the Almoravids, a Berber Dynasty, which played a major role in the spread of Islam in the area. At rest points for the Islamic traders along the routes, and in conquered territories, people were converted to Islam and this led to the construction of mosques in the Northern part of Ghana. Some of these mosques still exist today and they date as far back as the 17th Century AD.

The Sudanic style, though rectangular, has timber frame structures or pillars supporting the roof. It is characterized by two pyramidal towers (the minaret and the mihrab), and by a number of irregularly shaped buttresses, with pinnacles projecting above the parapet, which enlivens the mosque’s elevations.

Like other mosques in the Northern Region of Ghana, Larabanga Mosque is built in the traditional Sudanic-Sahelian architectural style, using local materials and construction techniques.

The mosque is built with mud and reeds, and measures about 8 metres (26 ft) by 8 metres (26 ft). It has two towers in a pyramidal shape, one for the mihrab which faces towards Mecca forming the facade on the east and the other as a minaret in the northeast corner. In addition, 12 buttresses of conical shape on the external walls are strengthened by horizontally-aligned timber elements. The architectural style is also known as “flat-footed adobe architecture”. All the structures are given a white wash.

Larabanga is situated 10 miles (16 km) west of Damongo and only about 5 miles to the Mole National Park. Damongo is about 72 miles west of Tamale.