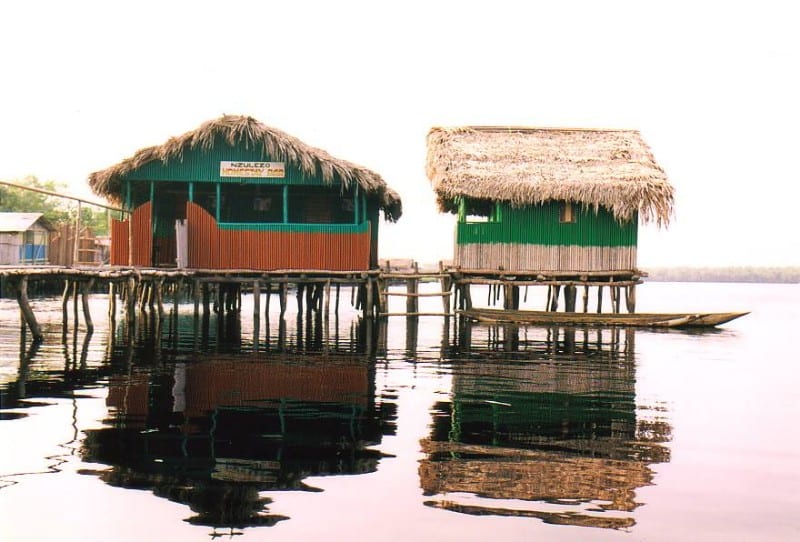 The village of Nzulezo (or Nzulezu) is located near the village of Beyin, roughly 90 kilometers west of Takoradi, in the Jomoro District of the Western Region of Ghana.

Nzulezo overlooks the Lake Tadane, and is entirely made up of stilts and platforms. In 2000, it was nominated as a UNESCO World Heritage Site, and it is a major tourist attraction area.

The village’s name “Nzulezo” in Nzema language, means “water surface”. According to local legend, the village was built by a group of people from Oualata, a city of the ancient Ghana Empire and in present-day Mauritania, which came about from following a snail.

Nzulezo was built over Lake Tadane, the settlement of Nzulezo consists of stilt-supported structures integrated seamlessly with the water-dominated natural landscape.

It is not known why the village has been built over the water, the main activities of its inhabitants is agriculture, while the fishery plays a secondary role. The lake is however perceived by the local population to protect against certain risks (e.g. a fire).

This site was added to the UNESCO World Heritage Tentative List on January 17, 2000, in the Cultural category.

The village was nominated to become a World Heritage Site for its importance in anthropology: in addition to being one of the few ancient settlements on stilts and platforms left in the world, there is a preserved wealth of local traditions connected with the cult of the lake. Lake Tadane occurs on the banks of all religious rites, and Thursday, is a day sacred to the lake, and it is forbidden to use and work on the lake for any activity throughout the day of Thursday.

In recent times the village has been opened to tourism, but with certain constraints (visitations are allowed only once a week). The village can be reached only by a canoe; the route, which crosses the rain forest, takes about an hour to 5 km away. In the village there is a church and a school. As the village is extremely isolated, Nzulezo suffers from numerous health problems, including the vast spread of malaria.