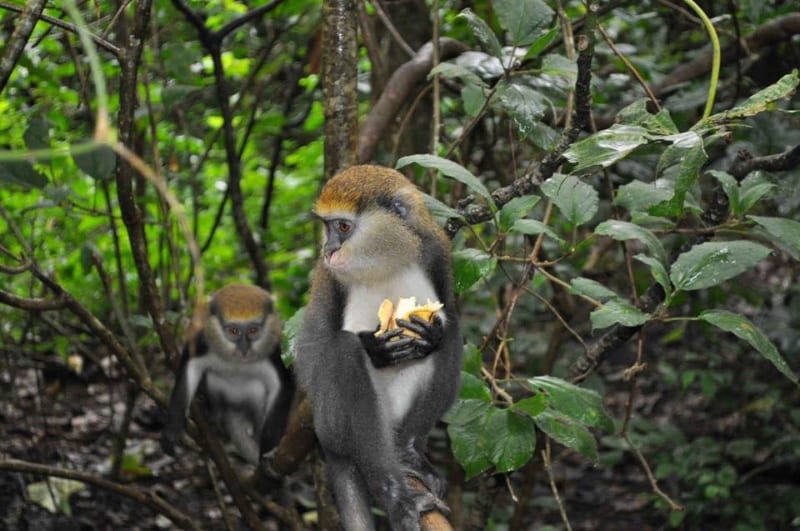 Digya National Park which can be located at the Sene East District offers an unforgettable experience to interested tourists. This National Park is recommended for adventurous tourists since its accessibility proves to be a bit difficult. The park covers an area of 3,475km of undulating terrain with sandstone inselbergs. Lying on the Western border of the Volta Lake, it is found to be divided between the Bono East Region through Ashanti Region to the Eastern Region. Six (6) primate species especially the black and white colobus monkeys, elephants and varieties of antelopes inhabit the park to give the tourist a notable experience.

Getting to the Park / Location

Digya can be accessed from Atebubu in the north. Drive through Kwame Dansoa town in Bono East region and through Donkorkrom, a small town and a capital of Kwahu district in the Eastern Region of South Ghana. The wildlife office of the Region is found in Atebubu and it has some moderately nice eating places and hotels. There is also chance of visiting a local market in the Donkorkrom and Atebubu areas – you are able to see and experience the amazing African way of doing business (commerce).

Also you can get buses from any of Ghana’s region to Kumasi and from thereconnect to the park. Using road transport can be done individually by bus or through your tour operator.

Things to do in Digya

Wildlife viewing: Digya is one of Ghana’s game viewing areas, you can’t visit Ghana and not visit Digya. It hosts several numbers of mammals and primates; hence you can’tmiss out on seeing elephants, buffaloes, crocodiles, baboons, monkeys among others.

Birding: This Park is a birder’s haven with over 236 bird species such as the Verreaux’s Eagle Owl, Pale-fronted Negrofinch, African Barred Owlet,and Thick-billed Cuckoo among others.

Hiking safaris: This is enjoyed while escorted by wildlife trained and experienced rangers, you walk through the Savannah woodlands to enjoy the beautiful scenery of the park.Remember to carry your camera and put on sturdy/strong hiking shoes.

Canoeing:You can enjoy a canoe trip along the Sene River in the Park. You will enjoy watching wildlife, vegetation and birds all through on the canoe.

There are a number of safe and comfortable hotels around Digya National Park to accommodate any number of visitors, you can enjoy lunch, dinner or relaxation in these hotels.

Also those around Ashanti region and are planning to visit the park can spend a night in any of the resorts or hotels around, these suit any budget. Some of the best in this region include; Bosomtwe Paradise Resort, Wadoma Royal Hotel, Laposada Hotel, Sanbra Hotel, Royal Park Hotel among others.

Also note that some facilities in Digya are still undeveloped, however the Wildlife Division is trying to improve on the infrastructure, the Park Management and also develop Tourism Facilities in the area. They are working hand in hand with different donors, the private sector and the community.

Digya National Park is found in the Ashanti region of Ghana bordered by Lake Volta in the east.  The borders of the park also stretch into Brong Ahafo region. Digya is the oldest protected area in Ghana gazetted as a reserve in 1900 and then a park in 1971.

Lake Volta is the largest man made lake in the world. Two arms of the Volta Lake, the Digya and Obosom rivers curve around the almost peninsular park in the north and south.

There are several species of birds in the park with more than 230 birds. Some of the birds include the African Reed Warbler, the Black-backed Cisticola, Verreaux’s Eagle Owl and Sun Lark, Pale-fronted Negrofinch, African Barred Owlet and Thick-billed Cuckoo…to mention a few.

Places to see / Nearby Attractions