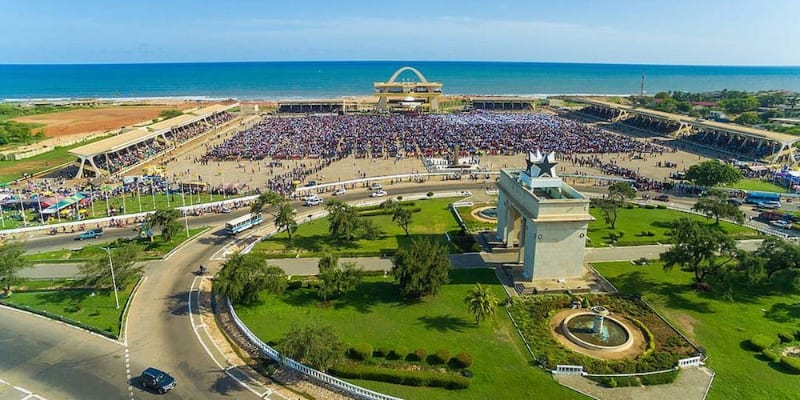 In 1957, the Ghanaian politician and revolutionary leader Kwame Nkrumah led the Gold Coast, now Ghana, to its independence from Britain. Nkrumah became the first prime minister and president of Ghana, and to celebrate his nation’s newfound autonomy, he commissioned the construction of a huge public square.  Black Star Square, also known as Independence Square, is located in Accra, Ghana and is now the site for all the major military and civic parades in the Ghanaian capital. It was completed in 1961 to coincide with the state visit of Queen Elizabeth II.  From the first parades in honor of the Queen’s visit all the way up to the present day, Black Star Square has hosted all of the country’s major national public gatherings, national festivals, military parades, and concerts.  The most important parade held in the square each year on March 6 is the Independence Day parades.

The Independence Arch in Accra, Ghana is part of the Independence Square which contains monuments to Ghana’s independence struggle.  In Independence Square are large stands with a total seating capacity of 30,000 surrounding the edges of the square. The square boasts three monuments which encapsulate the fight for Independent and liberation. These monuments include the Independence Arch to the south of the square, backdropped by the Gulf of Guinea. On the opposite side of the square but facing the arch is the Memorial of the Unknown Soldier, which honors the Ghanaian soldiers who fell fighting for their country. Just to the north of the main square is a roundabout, in the center of which stands the Black Star Gate, an imposing monument topped by the Black Star of Africa, the five-pointed star that symbolizes Africa in general and Ghana in particular. The monument bears the large inscription “AD 1957” and “Freedom and Justice” and the Liberation Day Monument. The Independence Square is one of the largest city square in the world.

The Independence Arch is guarded by several soldiers who prohibit people of taking close up pictures of the Arch with the exception of those with official permission, but every tourist or visitor is at liberty to take pictures of the area.

Liberation Day monument is a monument in Accra, Ghana. It stands in honor of several veterans of the Burma campaign conducted during the Second World War  by commonwealth forces in which the veterans fought for the British Empire. After returning to Ghana, some of the veterans began a peaceful protest and marched towards Christiansborg Castle, then the seat of the Ghanaian colonial government. The protesters were fired upon, and seven of the veterans were killed. 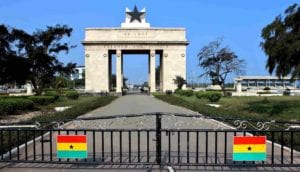 Black Star Square is a site for Ghana’s Independence Day parade, which falls on the 6th of March every year. 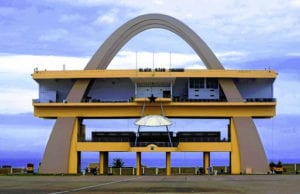