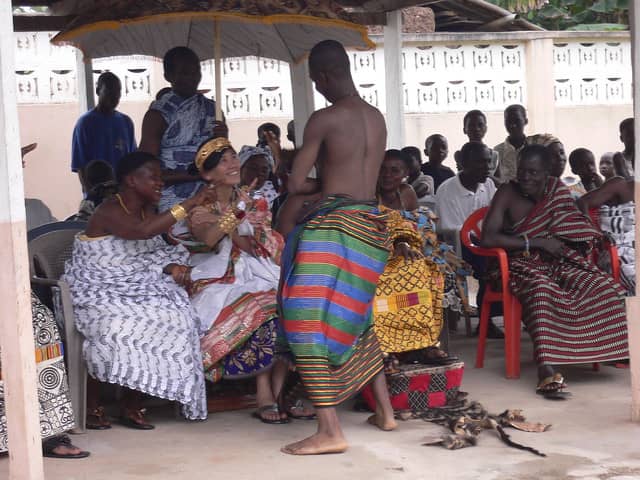 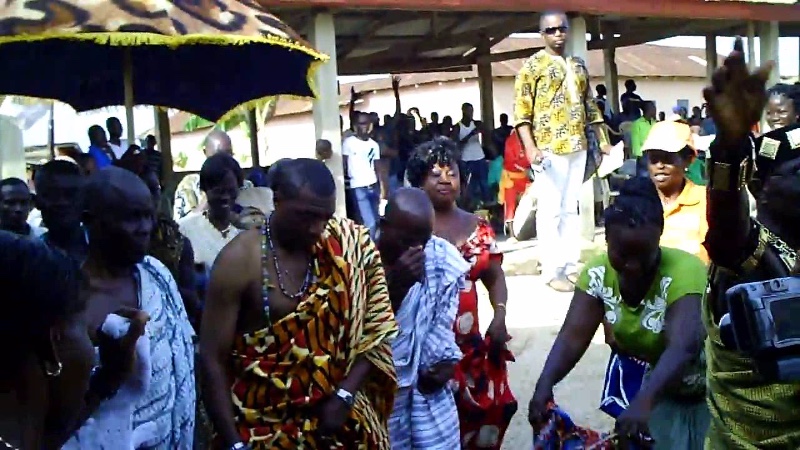 The Odwira Festival is celebrated by the people of Denkyira in the Central Region. The festival runs for weeks, beginning at Jukwa, the traditional capital, and ends at Dunkwa- On- Offin, the administrative capital. It signifies cleansing or bathing their ancestors and lesser gods. Drumming and firing of guns are done to announce the festival in the palace.

In Akan when people say Odwira, it is a reference to the time the paramount stool called “Bankam” descended from heaven. One day after a heavy rain, a fetish priestess called Ayekra Adeboe discovered the stool made by precious beats and gold. It’s believed that the stool is from heaven and the soul of Denkyira. It is so secret that no one can see and touch it except the royal family. The female became the first king of Denkyira and in Akan people say “ebedwiri” hence the Odwira festival, so the festival is meant to mark the descent of the paramount stool of Denkyira. Therefore we can see that it is purely a religious celebration. Odwira is also a period of purification after battles or wars.

One week before the festival, all the drums at the palace are brought out to be purified with mashed yam mixed with red oil (Palm oil) and from then drumming and noise-making is banned till everything is over. If a relative dies during the preparations the family is not allowed to have the funeral until after the festival. This period of “Silence” is found necessary in order to give the ancestors and gods of the state the right atmosphere in which they can prepare for the “Odwira”. This period also serves to mentally prepare whole Denkyira state for coming to the festival.

On Sunday mid-night, a god of executioner “SASATIA” come to Jukwa from the town Abrafo. (about five kilometers north of Jukwa) The residents take their god to the Gyaasehene’s house and inform the Denkyirahene of their arrival. No one is supposed to set eyes on them or lose their life.

Twenty-one guns fire on top of massif in Jukwa. Seven represent each of the three main traditional divisions of Denkyira-Akomantire, Kyeremfem, and Agona Adontendom. Seven times in three turns by seasonal hunters, announce the start of the celebration one division after the other. There is a group of people who are specially trained to fire these shots. In fact it is the duty or responsibility of the “Gyaase” divisional chief to assemble these people to give the gun shots. The firing of the guns also calls attention to the ancient wars and brave of the Denkyira and the duty of all Denkyira citizens to obey the ritual.

Monday – The day of Mourning and Consultation of the Gods

On Monday morning, women wear black and red to show their sorrow to the departed. The elders pour libation for the ancestors by schnapps, and go to the palace where the mourning for the dead ancestors go on with drumming and horn blowing. There is wailing and weeping by the women amidst the firing of guns. Its significance is to remember the departed. Also, the chief of the state linguists “Akyeamehene” pours libation at Yentumi shrine, the ancient war god, and use mashed yam to feed the god. In the evening, the Denkyirahene, chiefs and elders dance to music from various state drums and musical groups: Kete, Fontomfrom, the special Asasaa drums (peculiar to Denkyira), Apirede, Ntahera and the Ankobea Asafo.  The Gyaase division chiefs assemble at the palace to get ready to visit the river side, “Surowi”. At about mid-night, they made up of only a select few carrying the state stool with bells, other sacred stools and the state gods, move solemnly to the river and wash them.

Tuesday to Thursday – Period of Relaxation

During Tuesday to Thursday, there are no official programs. Drumming groups such as adenkum, kete, fontonfrom, brass band, bosoe came from different locations to perform for the happiness of all and sundry. Such people were invited to play in turns as in the way of competing among themselves to gain the awards and the fame of the omanhene and his officials (paramount chief and his officials). The period witnesses marriage rites, settling of family quarrels and disputes through arbitration. People display their wealth as they parade, call on neighbors and friends, changing their clothing and ornaments several times during the day. It is also a time for the youth to be involved in the celebration because during rituals the youth are not involved so without these days the youth may feel unconcerned. During this time, all family members get together to entertainment, merry-making, and general relaxation. These activities help express the joy of the people and their gratitude to the gods and ancestors for seeing them through to another Odwira.

This day sees the lighting of the ceremonial fire and feeding of the gods. Not only the citizens of Denkyira, but also those of nearby states participate. During this day, no household or individual should start any fire until the traditional fire chief, the Ogyahene has lighted the ceremonial fire. The Ogyehene first carries a piece of firewood on his head, supported by four of his elders. His other subjects, men and women, all carry firewood and, singing a special song called “Ogyaho”, they parade through the principal streets of Jukwa ending at the stool house. The Ogyahene lights the fire with some rituals including the pouring of libation. The talking drums immediately announce the end to the ban of lighting fire. Individuals can now come to the stool house for fire to light theirs or start them on their own.

The ceremonial fire is used to cool the special meal that is fed to the gods, the various stools and the ancestors for the second and last time during the festival. Mutton, yams and eggs are the main items together with schnapps that chief linguist offers. Whilst a special group of men and women do the cooking, only the men, led by the chief linguist are allowed to enter the residence of the gods and stools to offer the ceremonial food. All the richly adorned chiefs of the state led by the Denkyirahene ride in their colorful palanquins and proceed to the river side, the Denkyirahene alights and personally offers sacrifice of a sheep to the river god as all his chiefs and people look on. After the sacrifices, the Denkyirahene rides in his palanquin to a durbar grounds and sit in state to receive homage from his chiefs and people. Here one observes royalty, dignity, pageantry, valour all portrayed in rich culture. Drums beat, horns blow, executioners recite poems, dance and display in their special robes, all in honor of Denkyirahene as the embodiment of the Denkyira state.

At this crowning durbar, the chiefs, people and invited guests go in a line to shake hands with the Denkyirahene to congratulate him on the sacrifices he has made to ensure prosperity and life for all in the years to come.

The festival might not be fully held yearly, because there are so many rituals that have to be performed and hence the expense, Odwira might not be fully held yearly. Even the festival is not able to celebrate every year, some necessary rituals are still held. We have mini festivals like “Adae Kesee” and “Mpaatum”. During these mini festivals or occasions the gods are fed but not on a wider scale as it will happen during the Odwira. Most of the rituals performed during the festival are done in the night and they are not to see the light of day and it is a taboo, for example, to whistle during the night because those things would ward-off the gods and the ancestors.

For feeding the ancestral stools and the gods, also for remembering the dead ancestors and re-unions and homecoming for all Denkyira “home and abroad”. It is also for rich display of culture and merry-making. It is a solemn religious and ceremony to remember the dead.