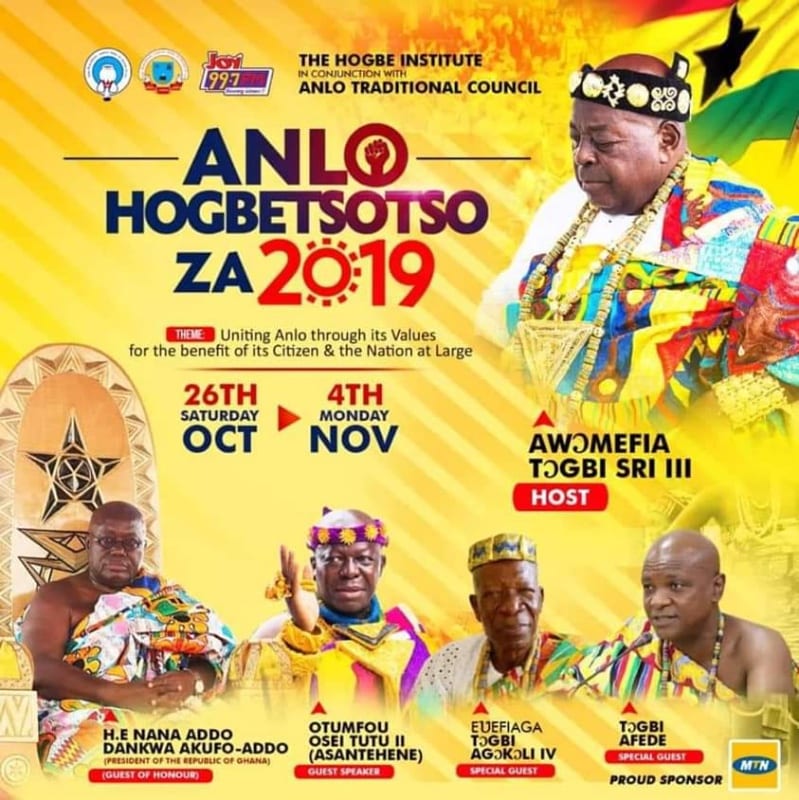 Hogbetsotso Festival is celebrated by the people of Anlo in the Volta Region of Ghana. The celebration starts in the month of November at Anloga, which is the traditional and ritual capital of the Anlo state.

Festival is a day that unfolds Ewe history and brings to play the memories of legendary exodus and heroic acts of men of boldness and their mystical powers that liberated the Ewe-Dogbo people from the rule of tyrant King of Kings Torgbui Agorkorli of Nortsie in Togo.  Nortsie is seen as the place of major exodus of the Anlo ancestry.

‘HOGBETSOTSO’ is derived from the word ‘HOGBE’ or ‘HOHOGBE’ the day of exodus, the moment in time when the Ewes in the Dogbo quarter of the walled city of Nortsie in Togo, escaped from the tyrannical ruler Agorkorli by walking backwards. In order to commemorate the exodus and the bravery of their traditional rulers who led them on the journey, the people created this annual “Festival of the Exodus”.

There are many ceremonies associated with the festival, including a peace-making period where all outstanding problems are supposed to be resolved. This is a purification ceremony of the traditional stool and a period of general cleaning when the villages are swept and rubbish burnt. This cleaning ceremony begins at the Volta Estuary and goes on for days until it finally reaches the Mono River in the Republic of Benin. An essential aspect of the festival is a durbar of chiefs and the people. Chiefs dress in very colouful regalia and sit in state to receive homage from their subjects. Dancing, singing and general merry-making go on throughout the festival. The main durbar always take place on the first Saturday of November in Anloga, the traditional home of the Anlo–speaking Ewes in the Volta Region.

The durbar forms a significant part of the week–long Hogbetsotso festival which commemorates the migration of the Anlo – Ewes from the ancient walled city of Notsie in present day Northern Togo to their present settlement. The festival culminated in drumming and dancing to “Husago” by walking “backwards” which they claimed was to elude their enemies who might follow them after they had escaped the tyranny of the wicked King Agorkoli.
The event brings together all the chiefs and elders of Anlo-land at a colourful durbar to mark the annual event in the Volta Region.