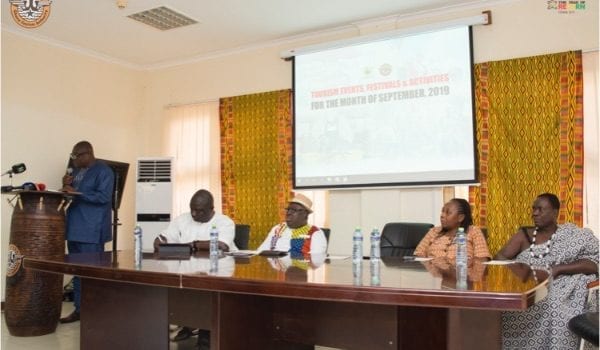 The Ghana Tourism Authority (GTA) under the auspices of the Ministry of Tourism, Culture and Creative Arts, has declared September a Month of Tourism geared towards promoting domestic tourism and whipping up public interest.

This coincides with the United Nations World Tourism Organisation (UNWTO) celebration of the World Tourism Day (WTD) 2019 slated for September 27, in India, on the theme: “Tourism and Jobs: A Better Future for All.”

Ghana’s celebration, as a member of the UNWTO, is to highlight the importance of the tourism sector to the economy and to mark the ‘Year of Return’ during which the Ashanti Region would host the WTD celebrations.

Mr Ekow Sampson, the Deputy Chief Executive, GTA, who made the declaration at a media briefing, said that Government was pursuing quality tourism development, which was internationally competitive and well-suited to Ghana’s social values and environmental setting.

He said aside its economic benefits, tourism helped to market the country’s cultural, historic and environmental heritage to the international community and educate the indigenes on their country’s values.

He said the GTA had initiated a national theme dubbed: “See Ghana, Eat Ghana, Wear Ghana and Feel Ghana,” an innovative marketing strategy to enable Ghanaians to appreciate their tourism, culture and creative arts potentials and engender cross-culture exchanges as well as a culture of travel.

Mr Sampson said the Authority had endorsed a number of festivals as avenues to propagate national culture as they connected citizens to their roots, origins, values and cultural heritage.

He called on the private sector and the media to promote the Authority’s initiative and the declaration of September as the month of tourism in Ghana.

The celebrations would be held in the Greater Accra, Ashanti, Eastern, Volta and Central regions from September 1 to 29.

Mr Davis Opoku Ansah, the President of Kwahu Professionals Network in the Eastern Region, said the most of the activities would be held in the Region to showcase tourists’ destinations that most people were not aware of and urged the media to create awareness of all events to make the celebration a success.