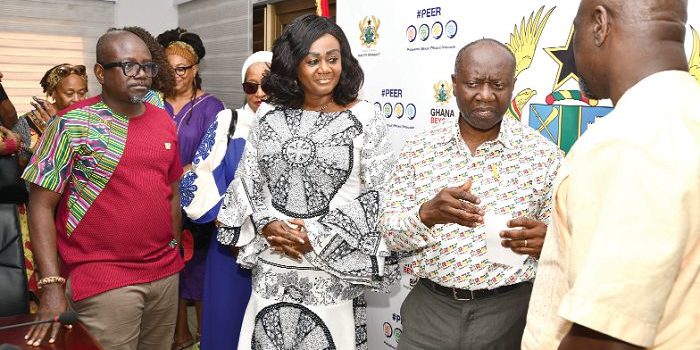 The Ministry of Finance has created an investment mechanism to help drive investment into the country from the Diaspora.

Known as the ‘Africa Sankofa Account or the ‘Diaspora Savings and Investment Account,’ the interest accruing banking product is targeted at Africans living abroad, who desire to invest in the Ghanaian economy.

The ministry is collaborating with universal banks to market the product targeted at institutional and retail investors in the diaspora, raking in about $3 billion.

The Minister of Finance, Mr Ken Ofori-Atta, who announced the initiative at a media briefing in Accra yesterday, said the account was would be operational within the next three months.

The minister said MoF would engage the Bank of Ghana and the Ghana Investment Promotion Centre (GIPC) to fine-tune how to create the instrument to draw in the funds and how to get the retail impact of the investment account.

Mr Ofori-Atta said through the initiative, the government was creating a favourable environment for Africans in the diaspora to make investment contributions into the economy.
He said the account, when fully operational, would help ease the integration of the global African family abroad into the society and put Ghana on the map as the preferred investment destination.
“This is to encourage the diaspora to see themselves as Ghanaians when conducting business in Ghana or buying a land,” Mr Ofori-Atta said.

Mr Ofori Atta explained that although many people in the diaspora had the desire to invest in the economy, the challenge over the years had been how to identify the right products that did not conflict with the country’s securities rules.

As a result, he said, by the new initiative the government was seeking to encourage the full participation of the diaspora through such secure investment products.

“What is important for Ghana is how to create an instrument that enables the average or retail person as a Ghanaian, or Caribbean or African American to participate in a way that doesn’t conflict with securities rules,” Mr Ofori-Atta said.

The desire to invest into the economy by Africans in the diaspora, according to the minister, was evident in the volume of remittance transactions that had been recorded over the past few years.

The amount, he said, was expected to hit $3.2 billion when data from the final quarter of 2019 was released.

Although banks have such diaspora and offshore accounts through which Ghanaians abroad and other investors channel their funds, this is the first time the government was taking advantage of the large pool of investable funds offshore that could be harnessed for long-term development.

The Minister of Tourism, Culture and Creative Arts, Mrs Barbara Oteng-Gyasi, for her part, said the investment product was in line with the ‘Beyond the Return’ initiative that was launched by President Nana Akufo-Addo last week, following the successful celebration of the ‘Year of Return’ initiative.

She said the focus of the ‘Beyond the Return’ initiative was the help drive investments from the diaspora into the country to help boost the economy.

Mrs Oteng-Gyasi said many people the ministry had engaged so far were interested in making some investment commitments in the country, hence the importance of the ‘Sankofa Account’.

“The account provides an opportunity for even those with limited funds to invest in the country,” the minister said.

She, however, advised the private sector to desist from exploiting the diasporan community who had made a birthright journey home.

The Chief Executive Officer of the Ghana Tourism Authority (GTA), Mr Akwesi Agyeman, for his part, said the ‘Sankofa Account’ would help move the relationship between Ghana and the diaspora from a mere visit to one based on investment.

He explained that the investment product would be the springboard for the diasporan community to partake in the rebuilding of the African continent.

April 16, 2021/59
Tourism In Volta and Oti Regions To Receive Renewed Boost With Operationalisation of Ho Airport
Change Location
To find awesome listings near you!