Thanks to the community owned and self-managed Wechiau Hippo Sanctuary Project, social amenities have been brought to people’s doorstep. Wechiau town and the sixteen communities involved in the project have solar power that lights up their lives. Also, they need not drink from the Black Volta and risk guinea worm and bilharzia anymore. There are boreholes that pump up safe drinking water.

When they do get ill, a 24 hour health centre at Wechiau is there to restore health. The number of schools in the project areas has also increased. The influx of visitors sparks up demand for local goods and services.

We rowed across floats hooked to fishing net. The fish trap is set in the morning and then harvested in the evening. Life in the Black Volta includes cat fish, mud fish, tilapia and crocodiles. Fishing is the only activity allowed within the sanctuary. hunting and farming along the river are strictly prohibited.

Once in a while, we heard a piece of bird song; a chirp here, a coo there and a warble across. When these sounds were stringed together it was a choir act. If we had come at dawn, we would have been entertained to a symphony. The Wechiau Sanctuary is also a bird lover’s paradise. As many as 200 bird types have been documented. Any expert in ornithology would tell you that is a world class collection.

The names are as interesting as the species vary; Red-bellied Paradise Flycatcher, Yellow-throated leaf love and Western-banded Snake Eagle. Others are Four banded Sandgrouse, Senegal thick-knee, Greater Blue-eared Starling and Exclamatory Paradise Whydah. My tour guide took pains to point out the species. But with hippos on my mind I really couldn’t care much for birds.

One big one flew above us, went further up and swooped down, angling for a fish. In a flash, it was up in the air again. ‘‘Is that a kingfisher?’’ I asked, more in a bid to show that that I am not green. The predator’s manoeuvre was just like you see in wildlife films on TV. Only when I looked up hard at the bird, I could not see a fish in its claws. A miss, maybe.

By now we had done about half an hour. In my eagerness, I really thought we had gone past one hour. Not too far ahead I could see the famous Tukpon Island. Also known as Tankara, it is the biggest of all the islands within the river sanctuary. The spot is an important landmark as it served as the hide out for natives escaping from raiders during the Trans-Atlantic Slave Trade. 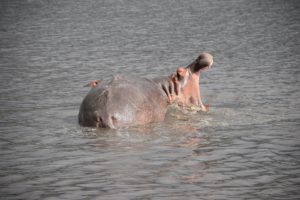 A dark, round-like shape jutting out of the river appeared within sight. I thought to myself, ‘‘game at last’’ and raised the alarm. It turned out to be a rock. Agbai advised that I should calm down. He assured that it was a good day to find hippos.

It is not everyday that one spots hippos at Wechiau. The best time is during the dry season spanning October to May. During this period the water level comes down and the animals cannot easily hide.

My guide drew my attention to a series of large muddy holes that led from the water vanishing in the undergrowth. He said they were the footprints of a hippo. Hippos are amphibious, meaning they live the double life of water and land creatures. They choose to leave the water at night to hunt for food on land.

The silence on the Volta was suddenly broken by a noise like the fast rush of water. Before I could ask, it came again; this time sounding like the puff of a heavyweight punch. I was not brave enough to turn and face Agbai for feedback. But I hear his ‘‘yes, yes’’, over my shoulder. I open my eyes wide. I see nothing. Then the silence returns. What was that noise?
‘‘A hippo is breathing’’, said my tour guide.

As we rowed nearer, something emerged. And quickly submerged. Agbai instructed that I keep my eyes on the spot. I did, yet all I could see was that the water in the area seemed to boil and boil and then… up rose the beast!
First thing that came to my mind was ‘‘reared its ugly head.’’ The phrase came home to me as a combination of power and movement and sound broke the calmness of the morning. At that material moment, I realised that I have finally come face to face with the object of my mission.

My record check showed that the spectacle was taking place exactly after 56 suspenseful minutes of boating. My reality check confirmed that after a few seconds, the animal was still in front of me. It was big, dark and leathery. But the real colour was something between brown and dark. A close look would show other shades.

What was more definite, however, was the monster’s ugliness. The hippo is ugly, in a way that commands you to watch. Like all big animals, it carried an air of majesty though awkwardly. Our hippo shook itself and then lowered its body. The head remained above water. 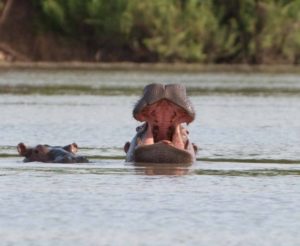 Quickly, I jotted down the vital statistics: broad snout, large mouth, short barrel-like body. Eyes, ears and nostrils are located on the top part of the head. And they all protrude. This facial set up allows the hippo to rest its whole body in the water, while still able to see, hear and breathe.

Hippos come up for air every 6 or 7 minutes, but when under pressure they can hold their breath under water up to about 30 minutes. The act of surfacing and breathing is automatic to the hippo. Even when in a sleeping state underwater, this animal will rise and breathe without waking.

I did not know when that was done but I realised that our canoe had virtually stopped and we were just floating around one spot. I noticed that we had ‘‘parked’’ by a rock to see action. Abdulai had got up and jumped to the top of the rock.

I was instructed to turn and face the beast. I turned slowly from my bench, checking to be sure that the straps of my life jacket were in place. I sat with a leg on each side of my canoe seat. Now I could see better action. Kassem, the camera man also positioned himself to take action shots. Between us and the hippo I could estimate a respectable distance of about some 50 metres. I hoped the hippo also sees 50 metres as respectful enough.

In my new position, I had full view of the animal. The Lobis call hippopotamus ‘‘kaka.’’ Make it ‘‘kakai’’ and you have the southern Ghana word for beast. A little towards our left, two more showed up. Agbai explained that it was a mother and child situation. Like humans, hippos normally give birth to one baby at a time. Their interval between births is two years. They are also social animals. They believe three is a crowd and thus like moving in pairs and sometimes alone. When they can’t help it, they form part of a larger group.

Another bloat of two hippos emerged. In all, there are twenty odd members in the sanctuary and that is quite a crowd. We watch the newcomers play. Though clumsy in appearance they seem graceful in the water. On land, hippos can easily outrun humans, in spite of their stocky shape and short legs. They have been clocked at 48 km/h while running short distances. If you are fussy with records, that is faster than the speed of an Olympic sprinter.

Although the hippo is not yet endangered, its habitat has been greatly reduced over the last 200 years. All over the world hippos are prized for their teeth which are superior to the elephant’s ivory. Their hide is also considered valuable. I ask Agbai about poaching. No hippo has been killed at Wechiau in recent memory. That speaks volumes for the cooperation of the communities.

Another reason may be because the hippo is among the most dangerous and aggressive of all animals. It is considered to be Africa’s most dangerous. When you put a bullet through it, for instance, you must be prepared to chase miles after it before you can get its body, that is if it falls at all. As a hippo’s anger grows it keeps ‘‘yawning’’ and then, shows its big teeth. A hippo’s jaws are capable of biting a 10-foot crocodile in two. Any question?

But hippos have their soft side too. Like humans, they are quite shy especially when in small groups. They can also be tolerant with birds pecking food from their backs. Even turtles and baby crocodiles are free to enjoy the sunshine on them.

The hippo’s feeding habit also is another paradox. Here is a creature which can go for three weeks without feeding. But when it wants to eat, the hippo grazes for five hours non stop. In one night it can consume 68 kilograms of grass. Now, that is equivalent to the weight of a fully grown man.

Some people think the hippo sweats blood. This is because of the pinkish, oily liquid that sometimes oozes from their skin. But this is not blood. In fact, the hippopotamus does not sweat. They do have a thin skin that easily dries out. And when out of the water for a while this liquid prevents the skin from drying out and acts as a sunscreen.
A hippo’s lifespan is usually 40 to 50 years. In captivity they live longer than that. The oldest hippo ever was called Tanga. She lived in Munich, Germany, and died in 1995 at the ripe age of 61.
– Kofi Akpabli is a travel writer