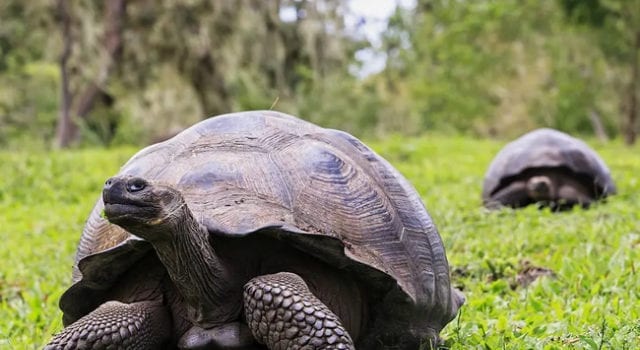 Two giant tortoises stole the show at the 2019 World Tourism Day (WTD), held at the Centre for National Culture, Kumasi.

The two rare-species tortoises aged 40 and 60, were put on display at the ‘Wildlife Stand’ of the exhibition, to showcase the nation’s rich biodiversity.

Also on display was a royal python, a non-venomous type of snake.

The teeming participants, including some visiting Africans in the Diaspora, as well as visitors from abroad, could not help but visit the Stand to catch a glimpse of the animals.

Each weighing more than 50 pounds, the giant tortoises are some of the oldest rare surviving wildlife the nation could boast of.

Ms. Cornelia Danso, an Official of the Wildlife Division of the Forestry Commission, speaking to the Ghana News Agency (GNA), Kumasi, affirmed their resolve to protect wildlife.

This is because those animal species were vital components of nature which ought to be taken care of in order to prevent them from becoming extinct.

The Commission also exhibited a pictorial layout of the variety of animal species the nation was left with at her conservation sites and national parks.

“Seeing the potentials of these sites for ecotourism, the Wildlife Division has opened the map for domestic and international visitors,” she told the GNA.

The exhibition was held under the auspices of the Ghana Tourism Authority, displaying the various districts and their tourism potentials, especially in the area of cultural, geo and ecotourism.

“Tourism and Jobs; a Better Future for All,” was the theme for this year’s celebration.

January 21, 2020/27
AMC Cinemas to show Ghanaian-Caribbean film ‘Joseph’ across US