Let’s Tour Ghana club in partnership with Hausa Tours Tours on the 29th of May, 2021 embarked on their second trip to the Volta Region, visiting Tafi Atome Monkey Sanctuary, Wli Waterfalls and Mount Afadja, popularly known as Afadjato. 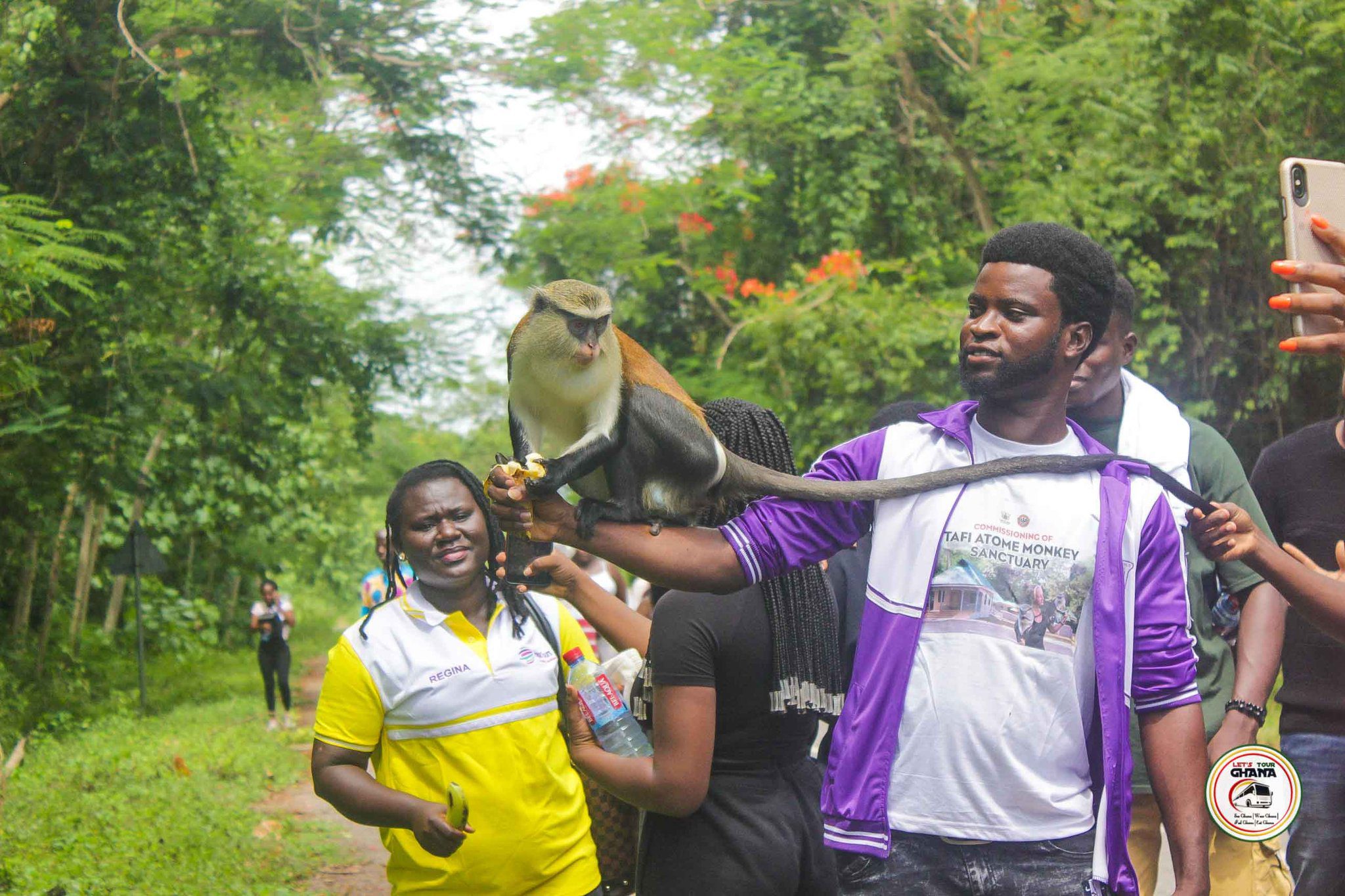 The first destination for the trip was the Tafi Atome Monkey Sanctuary where the Tour Guide, Robert took them through a brief history about the Mona Monkeys and advised tourists not to peel the banana but hold it very firm with hand stretched forth and the monkeys would take the banana to peel and eat.

At Wli Waterfalls the group crossed nine bridges during the 45minutes walk to the falls. Patrons enjoyed every tiny drop of water that fell from the rocks above by bathing in the pool of the fall. At sunset, the group was treated to authentic tunes of Volta amidst drumming and dancing by the fire side (bonfire) which went deep into the night. 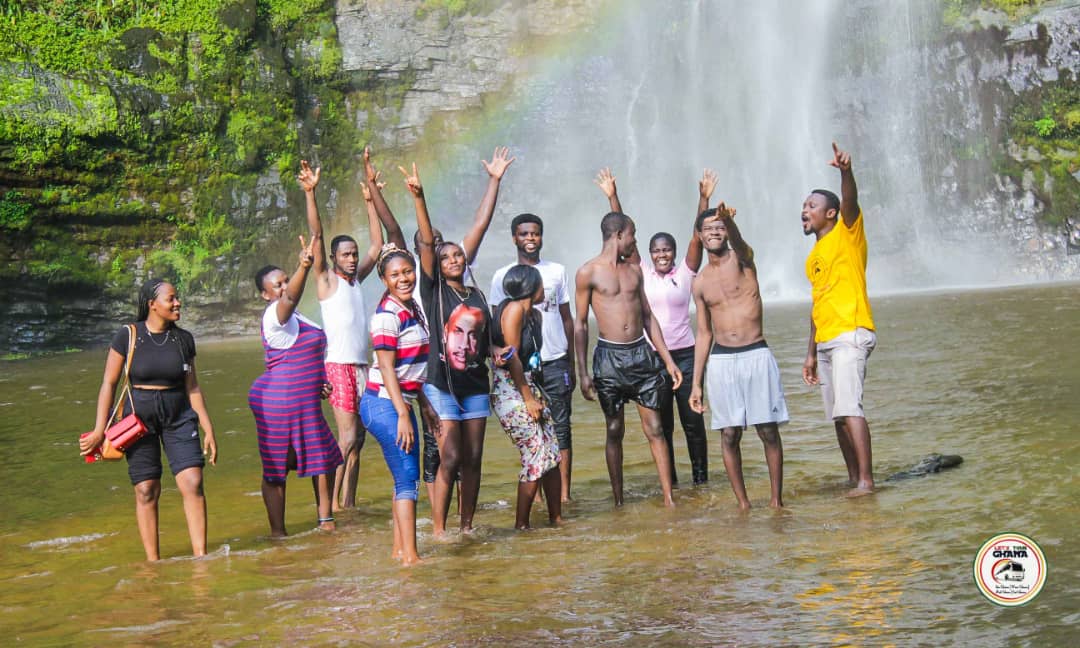 The next day which was a Sunday after they had done justice to their breakfast, they set off around 7:30a.m to engage in a climb battle (hike) with the great Afadja  Mountain (Afadjato). The Tour Guide, Albert briefed them about the history of Afadjato. According to Albert, it’s “Ava Tsa To”. Ava means War, Tsa means Plant and “To” means  Mountain.

Through series of events and evolution, over 300 years ago, one of our fore fathers who lived behind the Mountain (Ngortsi, Togo) discovered this new mountain and realised it was good for the planting of garden eggs so he later informed his people and they all settled here.

There used to be wild animals but they all left. They now had to hide in between the plants whenever they were fighting to sack the animals. The plants was such that when it got stuck on the human skin, the body would itch for a long time.

So it was a war between them and the plants for survival, I.e “Ava Tsa To” (War with the plants) but the Netherlands who later found themselves here on the land during those days couldn’t find the Ewe dialect Ava in their dialect so instead of the Ava, it was rephrased to Afa, to suit their way of pronounciation. That’s why it’s Afadjato. But in actual sense, it’s “Ava Dja To”. 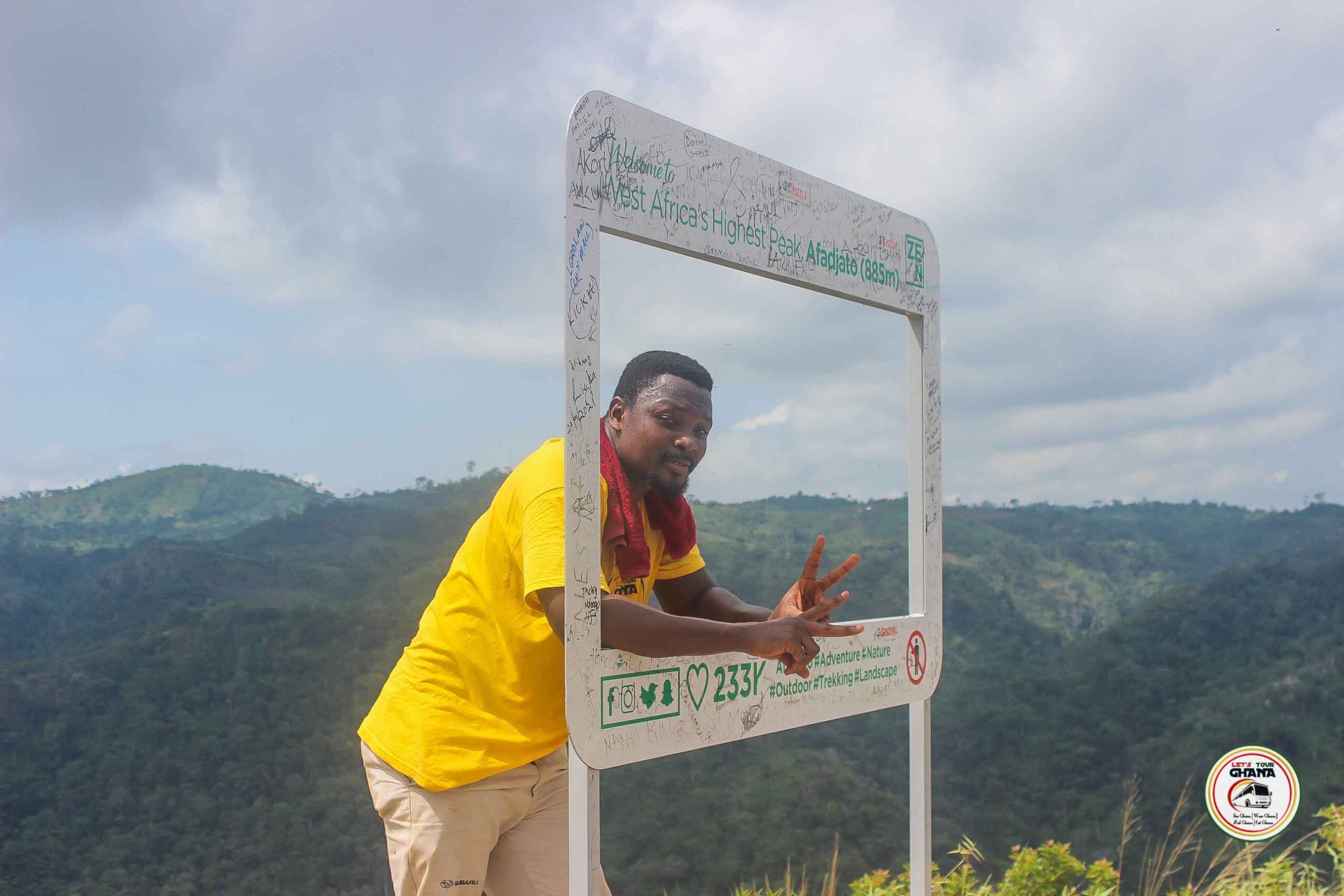 Indeed it was a Tug of War between the members of the Let’s Tour Ghana Club and the pathway to the top of the hill where Mr. 885meters resided above sea level.

It was really a great experience when about 99% of the club members climbed up and descended the 885meters rocky mountainous Afadjato above sea level.

It was all fun, joy and great learning experience in all as they returned from the trip on the 30th May, 2021 (Sunday) night to Accra. 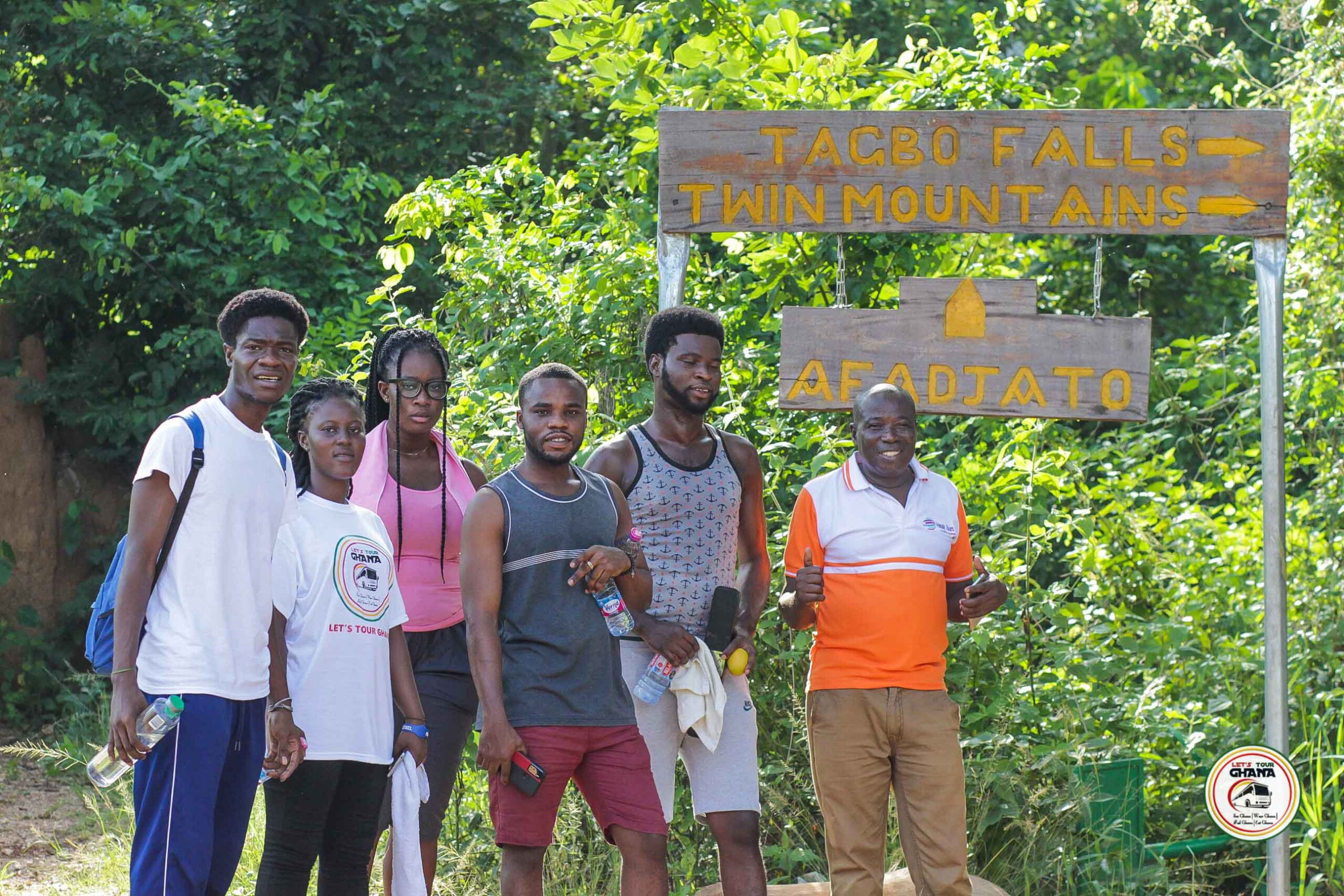 Members who embarked on the trip couldn’t hide their joy and the experience they had at these Tourist sites. To them, climbing the Afadja Mountain (Afadjato) alone burnt a lot of calories in their body which they were so happy about and also the fact that they have been able to exercise their whole body and enjoyed a great sight from a height of 885 meters standing for about 20minutes and more, something that was only possible to them by climbing the Afadjato Mountain. They also expressed how delightful being under the tiny drops of the Wli Waterfalls felt like. To some, it was as if they have been re baptized with all their sins washed away.

Having Monkeys all over you, taking bananas from your hand and behaving like humans is an everlasting and unimaginable feeling most of the club members expressed. In all, it was a trip worth going.

So what are you waiting for? Gather your jogging boots, swim suits and get some fresh bananas and pay a visit to these wonderful tourist sites in the Volta Region. You would love to go there over and over again when you visit because the feeling and experience you would have, would be an everlasting one. 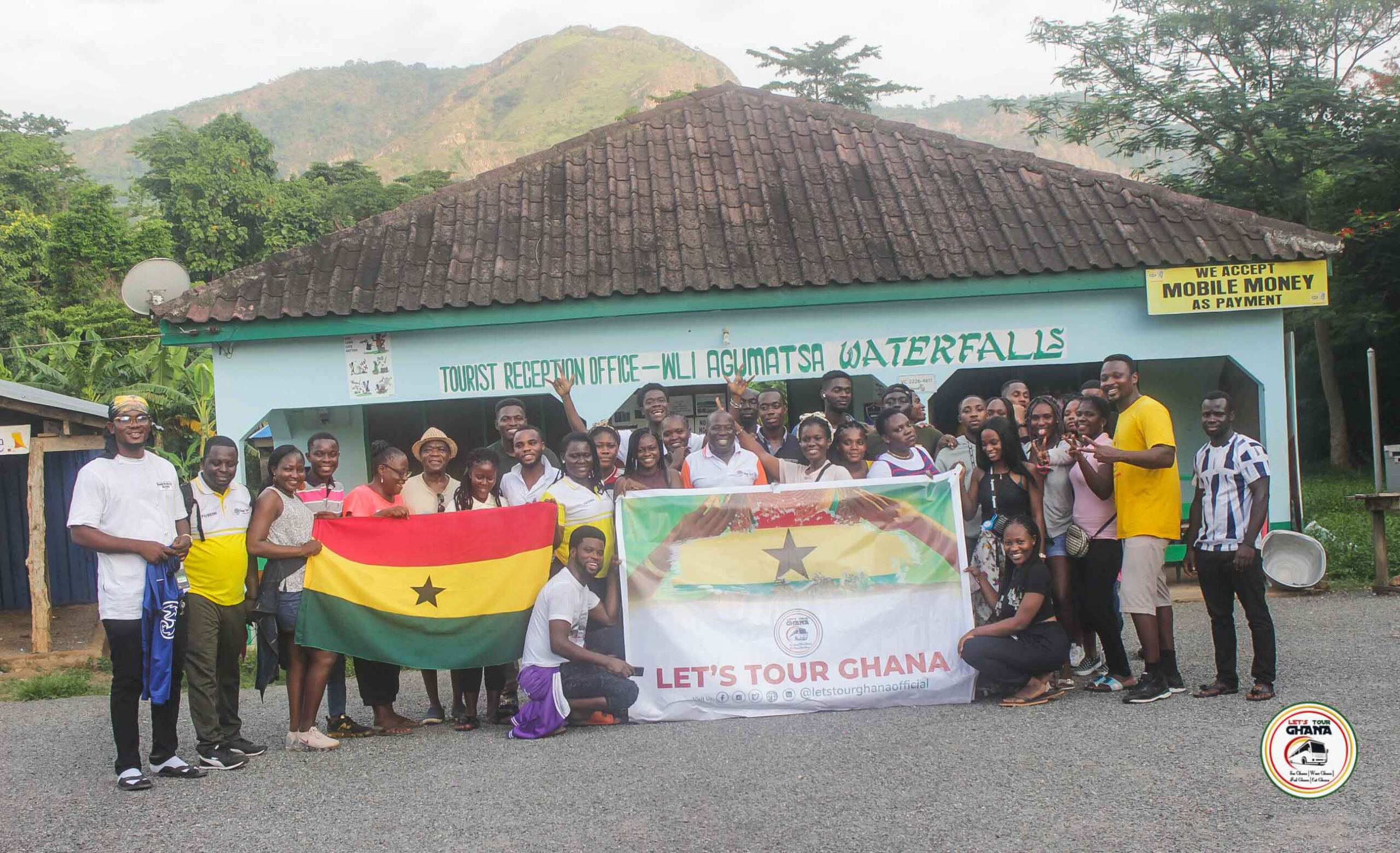 Let’s Tour Ghana’s mission is in line with the vision of the Minister for Tourism, Arts and Culture, Hon. Ibrahim Awal Mohammed ensuring that Ghana becomes the leading hub of tourist related activities to the rest of the world.

Let’s Tour Ghana tours are also in line with His EXCELLENCY, the President’s Launch of Domestic Tourism on Tuesday 1st June, 2021.

The Club was founded on the 10th of February, 2021 by  NSS Personnel of the Ghana Tourism Authority. Hausa Tours is a tour company led by the seasoned tour professional Mr. Fuseini Nawaru Mohammed as CEO, who took them through from start to finish on this one of a kind experience.