Nearly 100 people joined the Virtual Launch for PANAFEST 2021 on a Zoom Conference led by Rabbi Kohian, Executive Director for PANAFEST Foundation and Professor Esi Sutherland-Addy, Chairperson for the PANAFEST Foundation.  The festival was officially launched and is set to take place 23rd July – 3rd August 2021 under the theme, ‘Securing the African Family, Our Soul, Our Health, Our Wealth.’ Details for the full program of events have yet to be confirmed, but the Grand Durbar, which serves as a major event that brings together the representation of Chiefs and Queen Mothers will continue to be in the program. Sutherland-Addy says, “The Grand Durbar has a Pan African tone to it, making it different from other durbars,” thus it will remain a key part of the celebration. 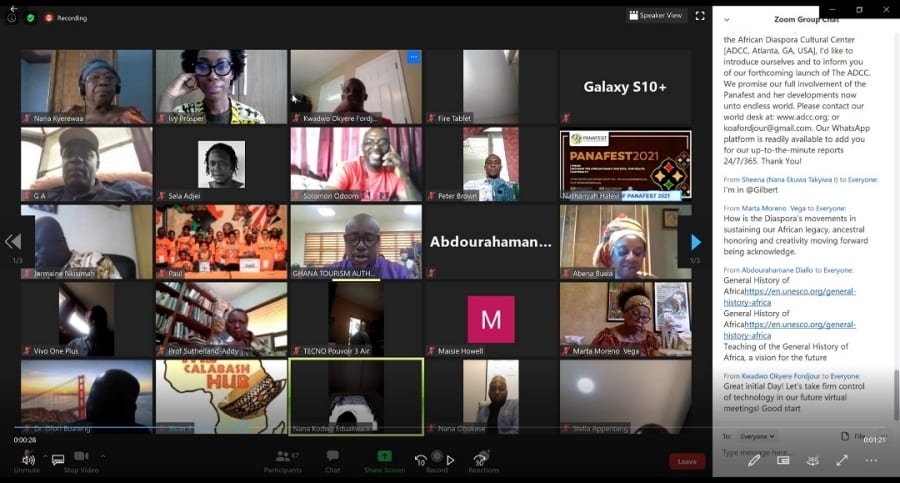 Guests who joined the virtual launch came from all over the world including the U.K., United States, Puerto Rico and Ghana.  Kohain greeted all attendees saying that the coronavirus has put us into this virtual situation. Because of social distancing measures and border closures, it was necessary to make this a virtual launch.

The Paramount Chief of Cape Coast, Osabarimba Kwesi Atta II,  was the first speaker Rabbi Kohain introduced to address everyone on the virtual call. “Today is a remarkable day for us to launch PANAFEST 2021,”  he said. “…because the African is being marginalized in the minds of other people, that’s why we are calling on all Africans, wherever they find themselves, to take part in next year’s PANAFEST celebrations…Let us tell the whole world that Africans matter and for that matter….the black man matters.”

Professor Esi Sutherland-Addy thanked everyone for joining the call before she began to deliver her welcoming statement.  ”Last year the African family came together in large numbers to participate in ceremonies, rites performances and conferences, which PANAFEST has become known for…Certainly, the context of the commemoration of the infamous milestone of the 400 year anniversary of the documented arrival of Africans in the English colony of Virginia, and the declaration of 2019 as the ‘Year of Return’ provided a poignant focus for the festival.”  She went on to say that PANAFEST 2021 was planned to bring the African family together to review the dynamics of the return and explore it as an impetus of the future.

Head of the UNESCO Ghana Office, Abdourahamane Diallo said it is a pleasure to be involved with the launch of PANAFEST 2021.  “We want to send a message of solidarity to all our brothers and sisters all around the world from the diaspora and on the continent.” He continued by expressing the importance of the arts and how UNESCO has launched projects to show how the creative arts have been resilient during these times. “During our confinement, we saw how creative people were also at the forefront in the preventative communication of the disease [Covid-19],” he said. “I wish to congratulate the PANAFEST board for this year’s theme, ‘Securing the African Family, Our Soul, Our Health, Our Wealth’….it’s a very inspiring and a very timely one.

Marta Moreno Vega, Founder of the Caribbean Cultural Center African Diaspora Institute (CCCADI), joined the virtual launch from Puerto Rico.  She said the pandemic has revealed the reality of our communities around the world and we need to think strategically. “There is much information that was torn out of Africa and exists in places like Jamaica,” she said.  Connecting the diaspora communities with Africa is critical and people like Vega, play a key role in that.

Akwasi Agyeman, CEO of Ghana Tourism Authority, said it’s been a difficult year because of the pandemic having delayed many things. “One thing that has come out [of this] is the resilience of the African spirit,” he said. With Covid-19 continuing to cause challenges around the world, concerns were raised by the media on what would happen if the pandemic has not eased up in time for next year’s festival.  Kohain addressed this concern raised by saying, “We cannot wait to see what COVID does, we are projecting that by 2021 we can have a successful festival.”  The idea of virtual tours is being considered for those who may not feel safe to travel.

Rabbi Kohain acknowledged that due to technical challenges, some speakers who were scheduled to speak were unable to do so.  Hon. Barbara Oteng-Gyasi, Minister of Tourism, Arts & Culture, was slated to officially launch the festival.  Unable to take part, Mr. Agyeman spoke on her behalf. Despite some technical challenges while he spoke, he was heard announcing the event’s launch. “Ghana’s quest is to rise above and beyond…I wish to declare that PANAFEST is duly launched.”

Sutherland-Addy shared some insight and what the festival’s goals are. She reminded us that the pandemic has “…unearthed some chilling truths about the global African reality..and sustained inequities and erasure of people of colour from narratives.”  She said that “PANAFEST 2021 is designed to establish a buildup to provide platforms of dialogue and expression in all forms of the arts…which speaks to the interrogation of African lives in the global context.” The festival aims to demonstrate the need for the African family to secure our own history.

For more information about next year’s festival visit their website at www.panafestghana.org. 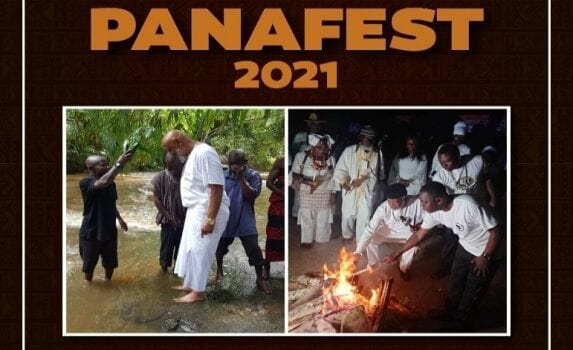 As part of Ghana’s quest to rise above and beyond the shadows of slavery and celebrate the African spirit of resilience through the celebration of PANAFEST, the Ghana Tourism Authority under the auspices of the Ministry of Tourism, Arts and Culture, and the PANAFEST Foundation has launched the 2021 PANAFEST celebration.

The PANAFEST 2021 which was launched virtually via zoom on 1st July 2020 is under the theme, SECURING THE AFRICAN FAMILY: OUR SOUL, OUR HEALTH, OUR WEALTH’

The theme, according to Mrs. Barbara Oteng Gyasi, Minister of Tourism, Arts and culture is timely and appropriate, as “we confront the COVID 19 pandemic which is ravaging the entire world”.

“Even though we are diverse people with different languages and cultures, we are one people and must not allow our differences to affect our unification. We must as a continent take whatever we have and everything we can offer to make for a united Africa”. She added.

Mrs. Oteng Gyasi again said the launch of the 2021 edition of the Pan African Historical Theatre Festival, is to honour heroes like Osagyefo Dr. Kwame Nkrumah, Dr. Edward Burghart Du Bois and other great ancestors who have built on the Pan-African ideals.

The Chairperson of the PANAFEST Board of Trustees, Prof. Afua Sutherland Addy, in her speech said the “PANAFEST 2021 was planned to bring the African Family together this time, to review the dynamics of The Return or the Sankofa Principle and explore it as an impetus for the future”.

According to her, the idea was generating a review of the true value of collectively reviewing the past with an agenda for creating visions of the future Africans would all like to see.

Speaking on PANAFEST 2021, Afua Sutherland elaborated that, PANAFEST 2021 is designed to establish a buildup which will start in August 2020 and it is expected to provide Platforms of dialogue and expression in all forms of artistic expression which speak to the raging interrogation of the state of African life in the global context.

” It is expected that activities at the festival will demonstrate beyond doubt that the African Family needs to re-assess and secure and own its own history but also set itself up to be vigilant”. She opined. 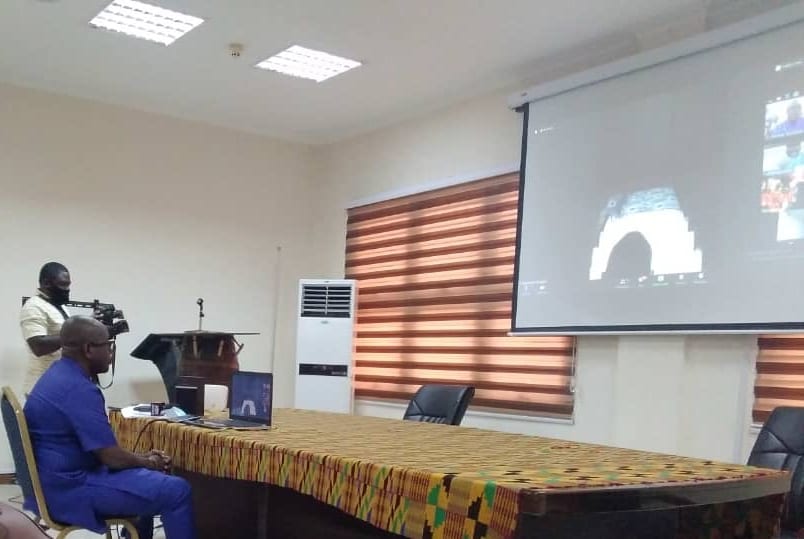 Mr. Akwasi Agyeman, CEO of the Ghana Tourism Authority, congratulated PANAFEST foundation for organizing the virtual launch, he also assured them that ‘GTA will continue to be a worthy partner for the PANAFEST festival’.

He again stated that the common thing COVID 19 pandemic has brought apart from its negative effect is the ‘resilience of African support’. “I believe moving from 2019 to 2020, there are lessons that we have learned that can be incorporated in the PANAFEST 2021 program, and the theme and activities will be a follow up of the historic ‘Year of Return, Ghana 2019’”.

PANAFEST 2021 is structured around experiences and platforms which are designed to constructively raise and examine important belligerent issues, foster healing processes, and also celebrate the strengths and resilience of African culture and achievements of Africans. The Festival is to be seen as a home and hub for creative Africans across the globe to both showcase their work and interact with each other in a meaningful way.

The PANAFEST will however feature community events that involve immersion of African-descended participants in everyday and ceremonial life.