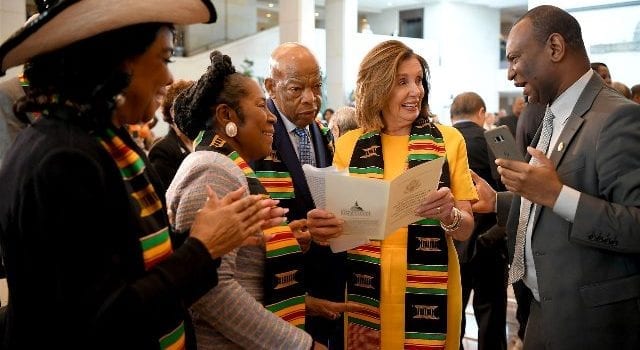 Members of Congress observed the 400th anniversary Tuesday of the arrival of the first enslaved Africans in America at a time of renewed interest over the history of slavery and its continued impact on contemporary society.

Questions about income inequality, reparations for slavery and other issues from the nation’s history of enslaving people are spilling into politics and culture with a reckoning not seen since the Civil Rights era.

The Republican leader of the House, Rep. Kevin McCarthy of California, said slavery in America led to “many shameful moments” in the country, including in Congress.

Senate Majority Leader Mitch McConnell, R-Ky., did not attend the ceremony but said as he opened the Senate that slavery was in many ways the country’s “original sin.”

McConnell’s own family history came under question earlier this year after it was revealed his ancestors reportedly owned slaves generations ago. On Tuesday, he said, while progress has been made, “change has come too slow.”

Pelosi called for passage of the Voting Rights Act, legislation that is part of a package of House Democratic priorities for Congress, ahead of the 2020 election.

Rep. Karen Bass, D-Ca., the chairwoman of the Congressional Black Caucus, called on colleagues to examine and embrace all parts of the nation’s history.

“We are so fortunate to live in this amazing country with our incredible history,” Bass said.

“All of our history is what makes this country a great country,” she said, and encourages all Americans to contribute to the “fight to build a more perfect union.”