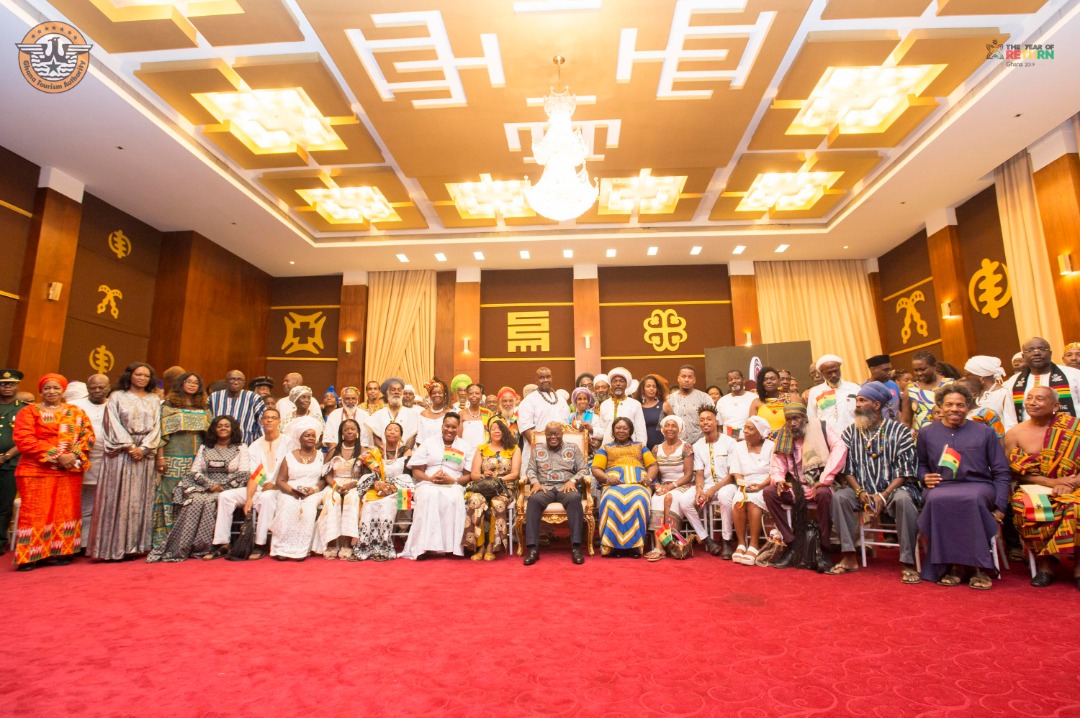 The President of the Republic, Nana Addo Dankwa Akufo-Addo, on Wednesday, 27th November 2019, conferred Ghanaian citizenship on 126 Diasporans, who have lived in Ghana for many years.

Speaking after the conferment ceremony, President Akufo-Addo stated that “I am glad you have decided to make Ghana your home, and thereby, join several generations of Diasporans, who committed their lives to us.” 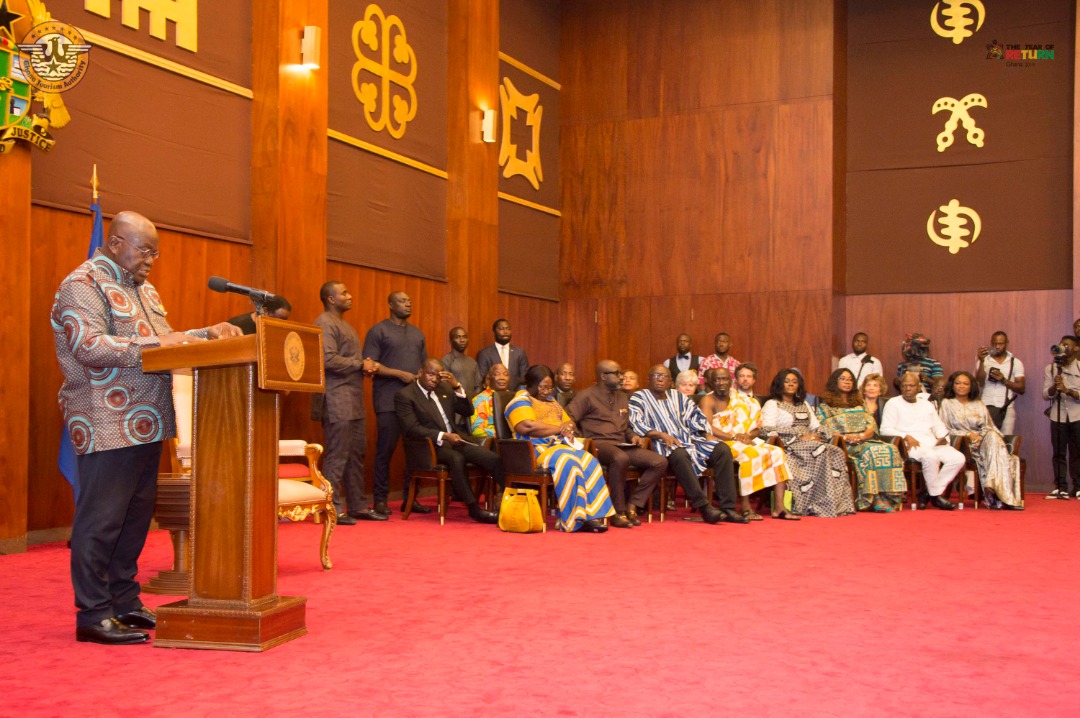 He noted that several persons, including the likes of George Padmore, Bob Marley’s widow, Rita, Maya Angelou, and W.E.B du Bois all found homes in Ghana, with the latter buried in the country.

With the ceremony being part of the series of activities commemorating the ‘Year of Return’, the President stated that Ghana recognizes her position as the location for 75 per cent of the slave dungeons built on the West coast of Africa, through which the slaves were transported. 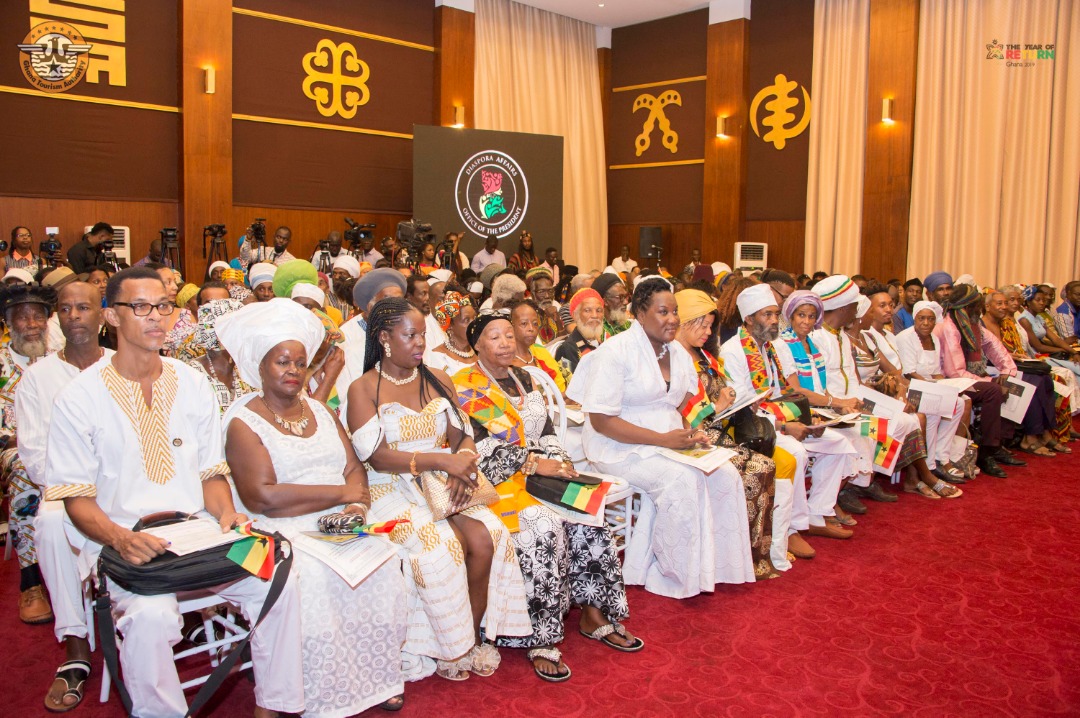 “That is why we had a responsibility to extend a hand of welcome back home to Africans in the diaspora. Many have responded to this call, and the ‘Year of Return’ has so far proven to be a joyful and learning experience all round for all of us,” he said.

To the 126 Diasporans, the President urged them to respect and abide by the laws of Ghana and live in accordance with the tenets of Ghana’s Constitution.

“You have the responsibility of preserving and promoting the image of a country whose reputation, amongst the comity of nations, is, today, high. You are citizens of a country that is regarded as one of the most stable on the continent, a beacon of democracy, governed by the rule of law and respect for individual liberties, human rights and the principles of democratic accountability, as a result of the commendable acts and deeds of past and present generations of your fellow Ghanaians,” he said. 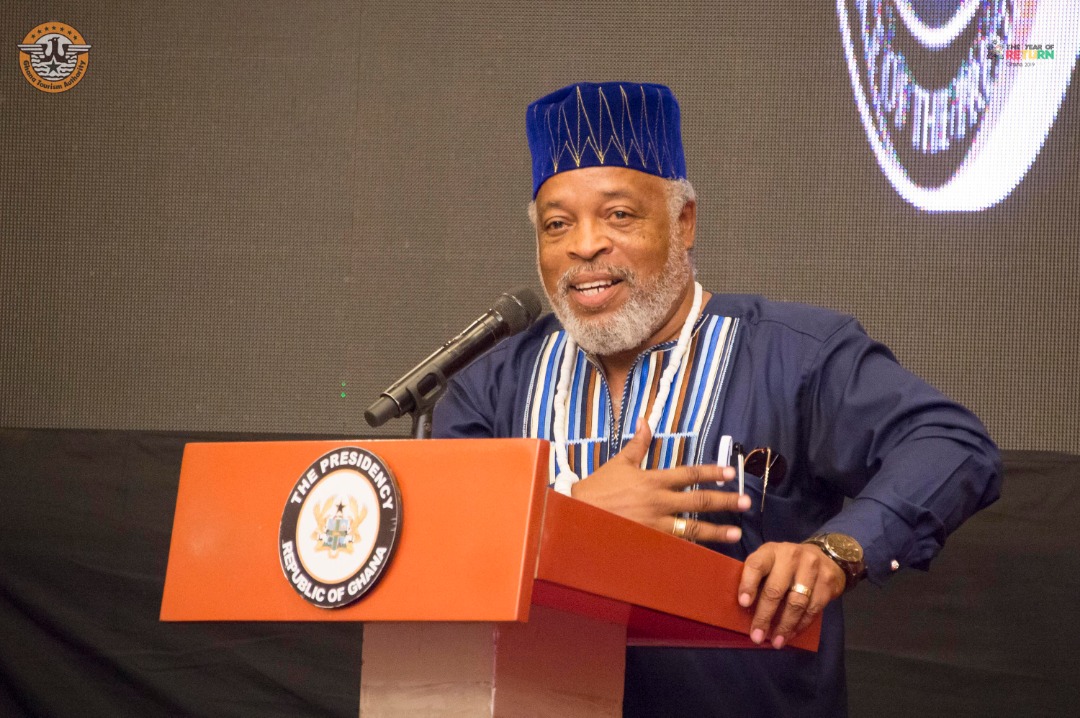 The President continued, “In all your actions, I urge you to guard jealously our country’s image. It is a charge, I am confident, you will uphold. In doing so, I suggest that to facilitate the process of re-integration, you learn at least one Ghanaian language of your choice – Akan, Ewe, Ga, Dagbani, Hausa, or Nzema, amongst others.”

President Akufo-Addo urged them also to be engaged fully in the realization of the vision of a Ghana Beyond Aid.

“Simply put, I just want us to be self-confident, and accept that we shall never reach the level of development we aspire to by relying on aid or external assistance, no matter how generous. It is a mindset that I wish us to discard, a mindset of dependency and living on handouts,” he added.

President Akufo-Addo, in concluding, paid tribute to the late Otanka Obetsebi-Lamptey, Jake to others, who, as Minister for Tourism and Diasporan Relations under the Government of the 2nd President of the 4th Republic, the outstanding Ghanaian statesman, His Excellency John Agyekum Kufuor, championed the cause for the return of descendants of the slave trade to their homes of origin.

“He instituted the “Joseph Project”, whose aim was to reconcile and unite the African peoples, on the continent and in the Diaspora, and to release their energies to help build Africa and the Caribbean. This ceremony would be a happy moment for him,” he added. 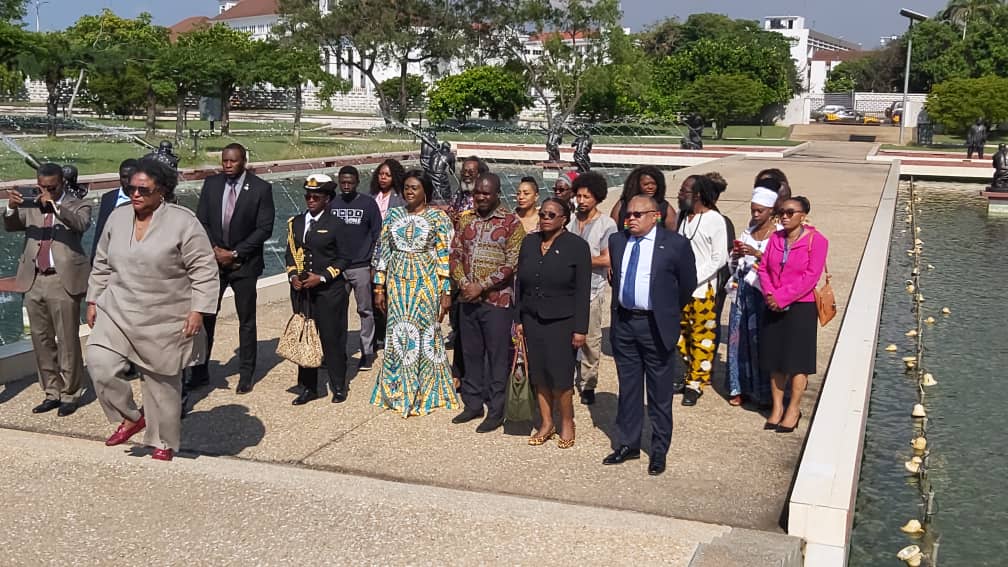 On her second day in Ghana, Prime Minister of Barbados, Mia Mottley, visited the Kwame Nkrumah Memorial Park and Mausoleum.  Her delegation, along with Samia Nkrumah, Chairperson of the CPP political party and daughter of Kwame Nkrumah, Hon. Barbara Oteng-Gyasi, Minister of Tourism, Arts and Culture and Mr. Akwasi Agyeman, CEO of Ghana Tourism Authority and Coordinator for Year of Return, took an early morning tour to pay respect to one of the greatest Pan-African leaders. 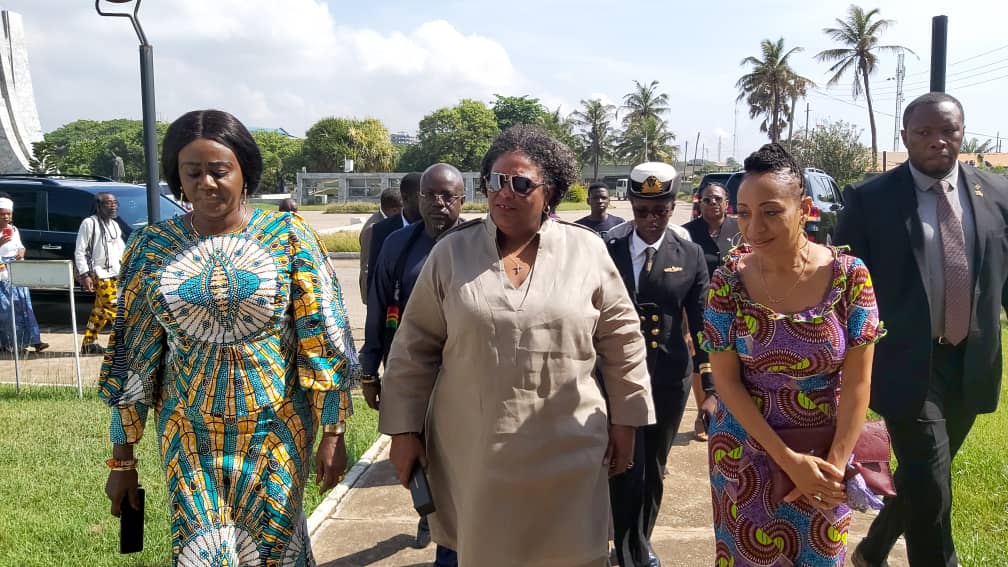 Mottley expressed how truly honoured she was that Samia Nkrumah had chosen to join them this morning on their tour.  “All of my adult life, I know of the name and work of Kwame Nkrumah and he has been an inspiration for all who have believed that justice is possible,” she said after the tour. Together with her team, they toured the grounds and visited the museum and burial site of Kwame Nkrumah and his wife Fathia Nkrumah, who was buried near him.

Prime Minister Mottley expressed her idea that education and equity go hand in hand when it comes to affecting civilization and allowing us to be the best we can be. It was evident that her experience so far has been impactful on her.  “That I have this opportunity not just to visit Ghana, but to come and pay homage and respects on behalf of Barbadian people…to the memory and legacy of Dr. Kwame Nkruman is a matter of great pride for me,” she said. 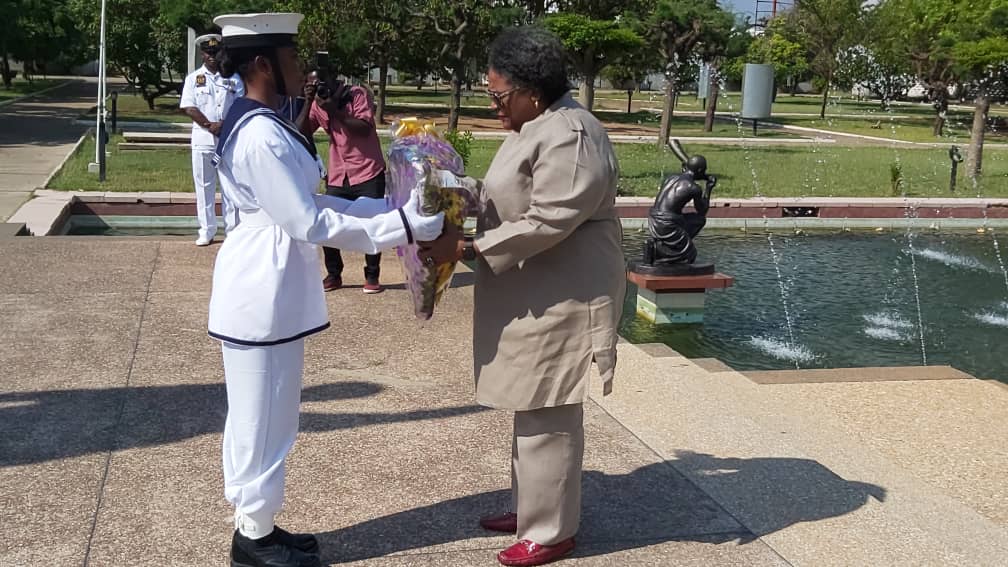 She is expected to participate in the Dumba Festival in Tamale later. PANAFEST & Emancipation officially opened with a wreath-laying ceremony remembering three important pioneers in the Pan African movement; George Padmore, W.E.B. DuBois and Kwame Nkrumah. All three were passionate about uniting the global African family and were responsible for laying a foundation that made a positive change for people of African descent. PANAFEST & Emancipation are deeply rooted in celebrating the African family and teaching the knowledge and heritage of our people. The events are taking place from 24th July – 2nd August at locations in Accra and Cape Coast. This year’s theme is ‘Beyond 400 Years: Reaching Across Continents into the Future.’ The first day’s events began at the W.E.B DuBois Centre for Pan-African Culture in Cantonments, Accra with a ceremony that included the laying of wreaths on his grave. Everyone then moved to the George Padmore Library where Padmore’s remains have been laid to rest to also perform a ceremony laying wreaths in his honour. At this location, an eternal flame was lit. “May our commitment to the cause of Africa and to the upliftment of its people everywhere on the continent and the Americas wherever the black race should find himself never die by the lighting of this flame,” said Ben Anane-Nsiah, Product Development Manager at Ghana Tourism Authority. The final part of the program was at the Kwame Nkrumah Memorial Park in Accra Central. Dignitaries and notable people from the diaspora were in attendance including Stephanie S. Sullivan, the U.S. Ambassador to Ghana, Akwasi Ababio, Director of Diaspora Affairs, Office of the President, Akwasi Agyeman, CEO of Ghana Tourism Authority, Claudia Turbay Quintero, Ambassador, Embassy of Columbia, and Dr. Thomas Mensah, Chemical Engineer and Inventor, and H.E. Dr. Erieka Bennett, Head of Mission Diaspora African Forum, are just a few of the key attendees at the event. A.J. Johnson, an Actress and Motivational Coach from the U.S. participated in the events with laying a wreath in honour of Dr. Kwame Nkrumah, Ghana’s first president. She said she couldn’t believe that she only came to Ghana for the first time just over 6 months ago and now here she was participating in a significant event. She was honoured to be asked to lay a wreath in memoriam of Nkrumah.

Steven Golding, President of UNIA Jamaica, delivered a compelling speech at Kwame Nkrumah Memorial Park. He spoke of how Jamaicans positively received President Nana Akufo-Addo on his recent trip to Jamaica, “We look forward to the day when all African nations will welcome home with open arms the sons and daughters of those who were ripped from this continent hundreds of years ago, because as Peter Tosh said no matter where we come from as long as we are black we are Africans.”

Dr. Thomas Mensah, Chemical Engineer, Inventor and holder of 14 U.S. patents gave his keynote address just before the crowd moved towards the wreath-laying at Kwame Nkrumah Memorial Park. His passion for uplifting Black people globally resonated in all he said. His motto, “The Right Stuff Comes in Black Too” is meant to inspire us to believe in the possibility of success when we believe in ourselves and learn to work together. It’s about breaking the negative stereotypes about Africa and black people worldwide.

This is just the beginning of many events scheduled over the coming week for PANAFEST & Emancipation. For more information on upcoming activities, visit the website www.panafestghana.org.