The President of the Republic, Nana Addo Dankwa Akufo-Addo, has extended an invitation to the people of Trinidad and Tobago to visit Ghana in this ‘Year of Return.’

According to President Akufo-Addo, Ghana recognises its unique position as the location for 75 per cent of the slave dungeons built on the West coast of Africa, through which the slaves were transported, adding that “we have a responsibility, and we do extend a hand of welcome back home to Africans in the diaspora.” 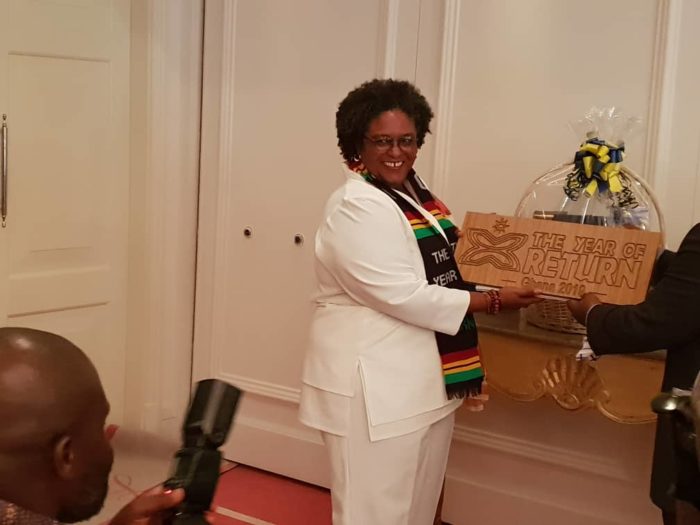 2019 marks the 400-year anniversary of the first recorded arrival, in 1619, of the first twenty (20) enslaved Africans in the Commonwealth of Virginia, which was to become part of the United States of America, initiating some of the most barbaric episodes in human history – the Trans-Atlantic Slave Trade and slavery.

The President, therefore, was hopeful that “the year would prove to be a joyful and learning experience all around for all of us, especially in affirming our determination that never again should the African peoples permit themselves to be subjected to such dehumanising conditions, sold into slavery, and have their freedoms curtailed in  order to build up forcibly countries other their own.”

President Akufo-Addo made this known on Thursday, 13th June 2019, when he addressed the media after he held bilateral discussions with the Prime Minister of Trinidad and Tobago, His Excellency Keith Rowley.

After the launch of the ‘Year of Return’ in Washington D.C., Ghana continued with the December 2018 Full Circle Festival, involving over 70 African American celebrities visiting Ghana to reconnect with their ancestral heritage.

Additionally, the Home Coming and Investment Summit, the African-American Investment Forum, the Pan-African and Emancipation Day Celebrations, the durbar from Jamestown to Jamestown, the Film Festival, and the Full Circle Festival are some of the activities that will be held to commemorate the year-long event.

“The commemoration should enable us, in the African Union, to consolidate and strengthen our links with our Sixth Region, i.e. the African Diaspora of the so-called ‘New World’, which have laid somewhat dormant, and make operational and extend the Free Movement Protocol to those in the Diaspora seeking to resettle in Africa,” the President stressed.

December 23, 2020/374
GIPC, GTA and GUBA organise ‘A Taste Of Ghana: Rock Your African Print’ to showcase rich Ghanaian culture
Near me
40